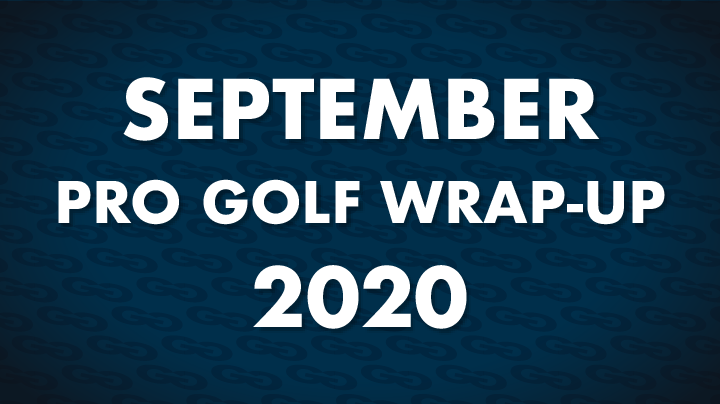 Welcome to the September Pro Golf Wrap-Up – everything you need to know in the world of golf expertly curated by your friends at Global Golf Management.

September isn’t traditionally a busy month for major championships, but this is 2020, and traditions haven’t meant much. Neither has scheduling. But at least most of the majors this years have been salvaged. Bryson DeChambeau and Mirim Lee sure are happy about that.

Dustin Johnson was happy, too, winning the Tour Championship in the first week of the month, which wrapped up the abbreviated PGA TOUR wraparound season.

DeChambeau won the 120th U.S. Open, the first national championship played in September in more than 100 years, while Lee survived a three-way playoff to capture the ANA Inspiration. Both events, of course, were rescheduled from their traditional dates because of the ongoing coronavirus pandemic.

A former U.S. Amateur champion, DeChambeau won a showdown against first-time competitor Matthew Wolff at Winged Foot Golf Club in Mamaroneck, N.Y. Thanks to a final-round 3-under 67 on Winged Foot’s demanding West Course, DeChambeau completed 72 holes in 6-under 274 to finish as the only player to break par – and only the third ever to do so in a U.S. Open at Winged Foot – and beat Wolff by six strokes.

“My goal in playing golf and playing this game is to try and figure it out,” DeChambeau said. “I’m just trying to figure out this very complex, multivariable game, and multidimensional game as well. It’s very, very difficult. It’s a fun journey for me.

“For me, it’s about the journey of, ‘can I execute every shot more repeatably than everybody else?’ I was able to do that this week.”

Lee had a harder time than DeChambeau, needing a chip-in eagle on the 72nd hole to get into a playoff and then beating Brooke Henderson and Nelly Korda with a 6-foot birdie putt on the first sudden-death playoff hole to capture the ANA Inspiration in Rancho Mirage, Calif.

Georgia Hall of England also worked overtime in the only other LPGA event of the month, beating Ashleigh Buhai with a par on the second hole of a playoff to capture the Cambia Portland Classic for her first LPGA win in the U.S. A past winner of the Women’s British Open, Hall, 24, shot a final-round 68 at Columbia Edgewater Country Club in Portland, Ore., and won despite a bogey on the last hole. Buhai closed with a 65 to tie Hall at 12-under 204 in an event reduced to 54 holes because of poor air quality from wildfires in the Pacific Northwest.

As previously mentioned, Dustin Johnson, 36, completed a great playoff run and won the Tour Championship for his first FedEx Cup title, worth a cool $15 million.

Johnson became the first No. 1 seed to win the FedEx Cup since Tiger Woods in 2009. In the PGA Tour’s staggered-start format for the tournament, Johnson started the event at 10 under—three shots ahead of Justin Thomas. He shot a 2-under 68 the final day at East Lake Golf Club in Atlanta to beat Thomas and Xander Schauffele by three shots. Schauffele had begun the event seven shots behind Johnson.

It was the third win of the year for Johnson, who a few weeks later was voted PGA TOUR Player of the Year.

Other PGA TOUR winners in September were Stewart Cink at the Safeway Open and Hudson Swafford at the Corales Puntacana Resort & Club Championship.

Cink, 47, of Georgia, hadn’t won the PGA TOUR in more than 11 years, since he beat Tom Watson in a four-hole playoff to capture the Open Championship at Turnberry. But a final-round 65 at Silverado Resort & Spa in Napa, Calif., his second 65 of the weekend, propelled him to a two-stroke victory over Harry Higgs. Cink finished at 21-under 267 to collect his seventh career title and end a winless drought of 4,074 days.

Swafford didn’t have to wait near as long between wins. Thanks to a final-round 3-under 69 at Corales Golf Course in the Dominican Republic, Swafford registered a one-stroke victory over Tyler McCumber, to register his second career victory.

Winner three years earlier in Express in Palm Desert, Calif., at what was then the CareerBuilders Challenge, Swafford, 33, completed 72 holes in the Dominican in 18-under 270.