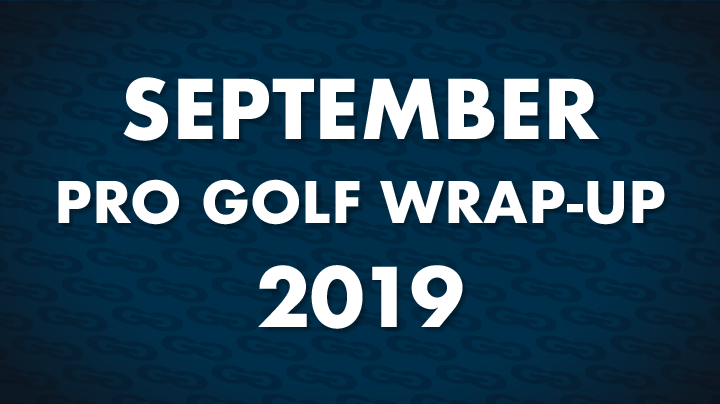 Welcome to the September Pro Golf Wrap-Up – everything you need to know in the world of golf expertly curated by your friends at Global Golf Management.

First-time winners were the story of September, young upstarts who are in the springtime of their careers. In fact, youth was served copiously in September, though one veteran also stole some limelight in taking a final bow in her career.

Ladies first, as the big story was Europe’s heart-stopping victory in the Solheim Cup at Gleneagles, Scotland. The entire affair hung in the balance until the very last stroke, and that was executed by Norway’s Suzanne Pettersen, who sank a seven-foot birdie putt on the final hole for a 1-up victory over USA’s Marina Alex. Had Pettersen missed, the match would have finished all square and Europe and the USA would have finished in a 14-all tie. The Solheim Cup, won by the Americans under Juli Inkster in the last two outings, would have remained in the hands of the visiting USA squad.

It was win or go home for Europe. Pettersen won and so did Europe, and the veteran who had barely played in the last two years after having a baby, decided it was the perfect time to walk off the stage and end her competitive career.

“I mean, can you ask for more?” Pettersen said. “The last putt to win the Cup, when it’s that close? History was just made, to win here in front of the Scottish crowd. I could never in a million miles dream. This is it. This is the last you’ll see of me playing in the Solheim. I can’t express it any better. Nothing beats the Solheim Cup in my career.”

Mi Jung Hur, 29, won for the second time this year, posting a wire-to-wire triumph in the Indy Women in Tech Championship Driven by Group 1001 in the Brickyard Crossing Golf Course at Indianapolis Motor Speedway in Indianapolis, Ind.

Hur opened with a 9-under 63 and went on to post a four-stroke victory over Nanna Koertz Madsen with a 21-under 267 total in the only regular LPGA Tour stroke-play event of the month.

The PGA TOUR started its new season in West Virginia at an event called A Military Tribute at The Greenbrier, in White Sulphur Springs. The new season looked a lot like the one just completed, with low scoring and high expectations, and youngster Joaquin Niemann of Chile was the winner thanks to an explosive finish, if you will.

Niemann, just 20 years old, birdied six of his final nine holes and won by six shots over Tom Hoge for his first TOUR title and giving Chile its first TOUR winner. He finished at 21-under 259 after a closing 6-under 64, tied for low round of the day, to join Rory McIlroy and Seve Ballesteros as the only foreign-born players in the last 95 years to win on the American circuit before turning 21.

Following next were Sebastian Munoz, who won in Jackson, Miss., at the Sanderson Farms Championship for his first TOUR title, and then Cameron Champ, though not a first-time winner, joined the young-man’s brigade by capturing the Safeway Open in Napa, Calif., in an emotional performance.

Munoz, 26, won in a playoff after he holed a 15-foot birdie putt on the 72nd green to tie Sungjae Im, last season’s PGA TOUR Rookie of the Year, who is all of 21 years old, by the way. The Colombian won on the first extra hole with a par. Munoz and Im tied at 18-under 270 at Country Club of Jackson after a closing 2-under 70.

A native of Sacramento, Calif., Champ, 24 years old, won a fall TOUR event for the second year in a row. Last year he won the Sanderson Farms. This time, he triumphed closer to home at the Safeway Open, sinking a 3-foot birdie putt to edge Adam Hadwin by a stroke with a closing 69 and 17-under 271 total at Silverado Resort & Spa North.

The victory was an emotional one for Champ, who dedicated the achievement to his ill grandfather, Mack, who introduced him to the game.