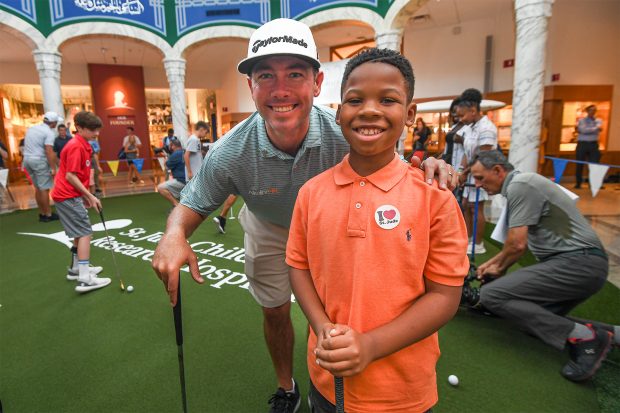 PONTE VEDRA BEACH, FLORIDA – PGA TOUR player Gary Woodland surprised Amy Bockerstette from Special Olympics Arizona last January with the opportunity to play the 16th hole together as part of his Waste Management Phoenix Open practice round. With a smile on her face and her can-do, “I got this” self-talk, Amy – the first collegiate golfer to compete with an intellectual disability such as Down syndrome – became an overnight sensation. Her remarkable, par-saving putt has been viewed nearly 44 million times across TOUR platforms and has been featured on the NBC Nightly News, CBS Evening News, the TODAY Show and countless other platforms beyond golf.

One year later, the PGA TOUR celebrated the anniversary of that memorable event by announcing that the TOUR and its tournaments have surpassed $3 billion in all-time charitable giving. The charitable total, which includes a record $204.3 million in 2019 to bring the all-time total to $3.05 billion, includes donations made by tournaments on the PGA TOUR, PGA TOUR Champions, Korn Ferry Tour, Mackenzie Tour-PGA TOUR Canada, PGA TOUR Latinoamérica and PGA TOUR Series-China.

“It’s truly a pleasure to thank our fans, sponsors, tournaments, players and volunteers for helping us generate over $3 billion for charity and positively impact millions of lives,” said PGA TOUR Commissioner Jay Monahan. “As remarkable as this milestone is, what really matters are the countless stories like Amy’s that every tournament has. Together, we look forward to continuing to reach – and celebrate – millions more.”

Woodland and Amy are two of those millions, and it’s been a whirlwind for both since the two first met at TPC Scottsdale. Woodland and his wife, Gabby, have welcomed twins; he celebrated the biggest win of his career at the U.S. Open, telling Amy he “used (her) positive energy” to do so; and Amy has become an ambassador for those with Down syndrome, launching her I GOT THIS FOUNDATION to promote golf instruction and playing opportunities for people with Down syndrome and other intellectual disabilities. The two will reunite on Wednesday, January 29, at the Waste Management Phoenix Open, the site of their now-famous interaction.

The PGA TOUR and its more than 100 tournaments across all Tours achieved the $3 billion mark just six years after surpassing $2 billion in 2014. The TOUR achieved the $1 billion mark in 2005. In addition, the record $204.3 million in 2019 bests the previous record of $190 million in 2018. The TOUR’s first charitable donation of $10,000 was at the 1938 Palm Beach Invitational. These dollars positively impact more than 3,000 nonprofits each year, such as the First Tee, which has introduced more than 15 million young people to its character-building programs through the game of golf.

Each PGA TOUR tournament provides individuals an opportunity to give back to the community in one of three ways – attending an event, volunteering, or donating money. Not-for-profit tournaments under the PGA TOUR umbrella donate their net proceeds to support local organizations, totaling more than $3 billion in donations to date. The impact these tournaments make throughout the year is possible thanks to the more than 100,000 volunteers who commit their time to ensure each event is a success.

To learn more about the PGA TOUR and the positive impact of its tournaments, volunteers, players, sponsors and fans, please visit PGATOUR.COM/IMPACT.

Additional impactful storylines from the 2018-19 season:

Alex Trevino has Ewing sarcoma. In addition to having his Make-A-Wish of meeting Jordan Spieth – his favorite player – granted at the Valero Texas Open, Alex’s VIP experience included signing a one-day contract with Titleist, complete with a lesson with Spieth to test out his new clubs. Spieth, who promised Alex he’d see him again when he was feeling better, was reunited with Alex with a surprise visit in November.

Matthew McClish underwent what would be his final of multiple brain surgeries, but when he woke up from the procedure, doctors told him that he had a stroke during surgery, causing paralysis on the left side of his body and impaired vision. Matthew, an accomplished player, relearned how to play golf – one-handed. At the Memorial Tournament presented by Nationwide, Matthew was surprised by Jack Nicklaus and his favorite TOUR player – Bryson DeChambeau, the defending champion – with a private lesson from DeChambeau on the driving range.

Anthony Trudel is from Parkland, Florida. During Anthony’s recovery from surgery to remove a brain tumor, all he did was watch golf, and he was an avid player prior to his decline in health. At the Rocket Mortgage Classic, Anthony’s Make-A-Wish of meeting Rickie Fowler – his favorite player – was granted with a chipping lesson, new set of Cobra PUMA clubs, and the opportunity to walk inside-the-ropes with Fowler as an Honorary Observer during the second round.

Bailey Jessop, who had bone cancer in his leg, designed FootJoy shoes for Justin Thomas to wear the week of the World Golf Championships-FedEx St. Jude Invitational. The shoes were delivered to Justin by RoxoTM the FedEx SameDay Bot on Tuesday of tournament week, where Justin surprised Bailey with a pair of his own.

Sarahi Ortiz is a graduate of the Western Golf Association’s Caddie Academy Program. She was born and raised in West Los Angeles, and through school, she learned of a unique work opportunity through the Caddie Academy to go to Chicago and caddie every day for seven weeks each summer. She knew nothing about golf and didn’t want to go. However, Sarahi pushed herself out of her comfort zone because she knew a bigger goal was waiting – the chance to earn a full college scholarship. Seven years later, she became president of the University of Oregon Evans Scholars chapter and vice president of the Evans Scholars National Committee. As part of the Wednesday Pro-Am at the BMW Championship, Sarahi had the once-in-a-lifetime opportunity to caddie for Tiger Woods.

Nikki Moore was seven months pregnant when her husband, Matt, was diagnosed with stage 4 colon cancer. At age 32, he passed away, leaving Nikki to raise their son, Cullen, while forming the “Live Moore” brand to carry on his legacy and raise awareness for early screening. At the PGA TOUR Champions’ Cologuard Classic, Nikki and Cullen were given an inside-the-ropes experience to walk alongside Cologuard ambassador Jerry Kelly and colon cancer survivor Tom Lehman during the opening round. As Cullen is now 3, he understands that “daddy is in the stars” and is the inspiration behind Nikki’s efforts to spread awareness and knowledge so that other families can avoid the loss they endured.

Four weeks after his birth, Ben Golden Peterson was diagnosed with dilated cardiomyopathy, a condition in which the heart becomes enlarged and cannot pump blood effectively. Stefani Swindlewas born 15 weeks premature with subglottic stenosis, a narrowing of the airway below the vocal cords and above the trachea which required her to live with a tracheostomy tube until age 4. At the PGA TOUR Champions’ Regions Tradition, Ben and Stefani spent the day with Alabama quarterbacks Jay Barker and John Parker Wilson, Auburn quarterbacks Stan White and Brandon Cox, and three-time PGA TOUR winner Chris DiMarco during the tournament’s Wednesday Pro-Am, which draws athletes and celebrities from the Southeastern Conference, as well as inspirational kids from Children’s of Alabama.

Jared Stancil and his father, Chad, took first place in unified golf at the 2018 Special Olympics USA Games. Jared, who was born with Down syndrome and endured 13 surgeries at an early age, was invited to hit the opening tee shot at the Korn Ferry Tour’s LECOM Suncoast Classic. While warming up for the shot on a chilly Thursday morning, Stancil was introduced to a number of players, including Harry Higgs and Justin Lower, who joined him on the first tee for the tournament’s inaugural shot.

In Kansas City, Missouri, Brookside Charter School is a tuition-free charter school with an emphasis on honoring diversity and preparing kids and families for success. At the Korn Ferry Tour’s KC Golf Classic, Brookside Charter student Hannah James was invited inside the ropes to join Lanto Griffin during Wednesday’s Pro-Am. For James, it marked her first time on a golf course and allowed for Griffin to share his own story of how the game impacted his life at a young age.

When Brandon Matthews missed a putt that would have extended a playoff at the VISA Argentina Open presented by Macro on PGA TOUR Latinoamérica, he was frustrated because a fan had yelled during his backstroke. Matthews’ anger subsided when he learned the outburst came from a fan who had Down syndrome and that he wasn’t trying to intentionally make Matthews miss the putt. “I want to meet him,” Matthews said, immediately going to greet the man, Juan, to ensure that Juan was OK and wasn’t blaming himself for what had happened. “Once I learned his situation, it totally changed my perspective.” The two chatted, and Matthews autographed some items for Juan as the two posed for pictures.

The PGA TOUR, headquartered in Ponte Vedra Beach, Florida, co-sanctions more than 130 tournaments on the PGA TOUR, PGA TOUR Champions, Korn Ferry Tour, PGA TOUR Latinoamérica, Mackenzie Tour-PGA TOUR Canada and PGA TOUR Series-China. Members on the PGA TOUR represent the world’s best players, hailing from 29 countries and territories (93 members are from outside the United States). Worldwide, PGA TOUR tournaments are broadcast to 226 countries and territories in 23 languages. Virtually all tournaments are organized as non-profit organizations to maximize charitable giving. In 2019, tournaments across all Tours generated a record $204.3 million for local and national charitable organizations, bringing the all-time total to more than $3 billion.