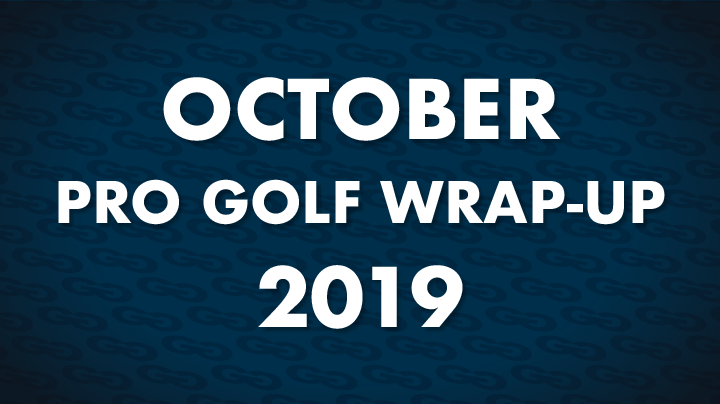 Welcome to the Ocotber Pro Golf Wrap-Up – everything you need to know in the world of golf expertly curated by your friends at Global Golf Management.

Tiger Woods winning the Masters in April was a very big deal, giving him his fifth green jacket and his 15th major championship. His victory in October at the inaugural Zozo Championship in Japan might have been even more consequential.

Coming off a two-month layoff after minor knee surgery, Woods beat Hideki Matsuyama by three strokes at Accordia Narashino Country Club with a 19-under 261 total that took an extra day to complete after a torrential rainstorm wiped out one whole day of play. The event ended on Monday, Oct. 11.

The 43-year-old American, who moved up to No. 6 in the world, registered his 82nd career title, which tied Sam Snead’s all-time PGA TOUR record, a mark that was thought to be near impossible to equal in this era. Woods, 43, proved it wasn’t, going wire to wire and making a statement that his days of winning are far from over.

“On behalf of the PGA TOUR, I would like to congratulate Tiger Woods for tying Sam Snead’s all-time PGA TOUR victories record of 82 at the inaugural ZOZO Championship,” said PGA TOUR Commissioner Jay Monahan. “Today, we celebrate both Tiger and Sam Snead as they share a record that, given how difficult it is to win just once on the PGA TOUR, should sit squarely alongside the greatest accomplishments in sporting history.”

Elsewhere on the PGA Tour, Justin Thomas, Kevin Na and Lanto Griffin claimed titles, Griffin for the first time in his career at the Houston Open.

Griffin, 31, won by sinking a 35-foot birdie putt on the 16th hole and then held on for a one-stroke victory over Mark Hubbard and Scott Harrington. He closed with a 3-under 69 and 14-under 274 total at the Golf Club of Houston.

The week prior, Kevin Na captured the Shriners Hospitals for Children Open in Las Vegas when he made a 4-foot par putt on the second extra hole to defeat Patrick Cantlay in a playoff. The two men finished regulation tied at 23-under 261 at TPC Summerlin with Na, who won his third career title, closing with a 1-under 70 to Cantlay’s 68.

The TOUR moved overseas in the third week of October, heading to Jeju Island, South Korea, and Thomas made himself at home, again, by winning for the four time abroad and the second time in three years at the CJ Cup at Nine Bridges.

Thomas won his 11th PGA Tour event with a final-round 5-under 67 and 20-under 268 total for a two-stroke victory over South Korean-born New Zealander Danny Lee.

Knight came up with the clutch performance of the season, firing a 5-under 66 at Old American Golf Club in The Colony, Texas, to win the Volunteers of America Classic by two strokes over Brittany Altomare for her first career victory. A rookie on the LPGA, Knight shot a career best 18-under 266. She came into the tournament needing to place no lower than fifth without ties to retain her tour privileges for 2020. Her previous high finish on the LPGA was 29th.

Two weeks later, with the LPGA in Shanghai for the first of four tournaments in Asia, Kang became the second player of the year to successfully defend a title when she repeated at the Buick LPGA Shanghai at Qizhong Garden Golf Club. Kang won by a stroke over Jessica Korda with a final-round 2-under 70 and 16-under 272 total. Korda, the third-round leader, had a 72.

Finally, Jang kept Kang from a second straight victory when she beat the American in a playoff at the BMW Ladies Championship in Busan, Korea. Jang won with a 4-foot birdie on the third hole of sudden death.

The two finished at 19-under 269 at LPGA International Busan with Jang firing a 7-under 65 and Kang posting a 64.

The LPGA remained in Asia for two more weeks before the season finale at the CME Group Tour Championship in Naples, Fla., Nov. 21-24.