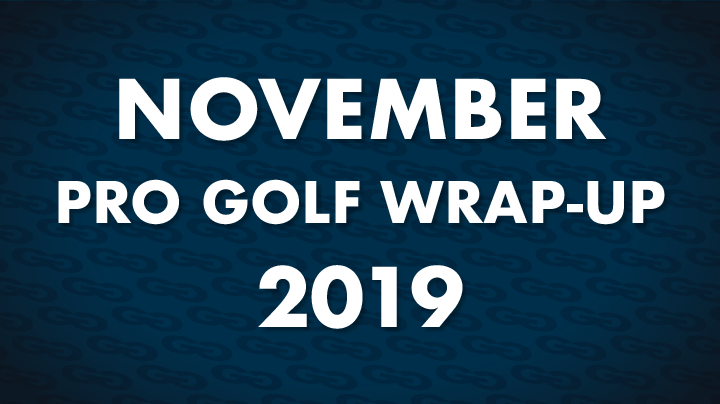 Sei Young Kim won the biggest event in golf in the month of November. Brendan Todd was the biggest winner. And the hottest player.

Those were the main headline makers in the penultimate month of the year, though upstarts Ai Suzuki and Tyler Duncan also had their moments on their respective tours, the LPGA and PGA TOUR.

Kim captured the CME Group Tour Championship, the final event of the LPGA season, and pocketed a record $1.5 million first-place prize. The talented South Korean sank a 25-foot birdie putt on the 72nd hole at Tiburon Golf Club in Naples, Fla., to win the largest check in women’s golf history, beating Charley Hull of England by one stroke.

“So I just try and make the right distance, and I made it,” Kim said after closing with a 2-under 70 and 18-under 270 total. “It’s unbelievable. I was like so emotional. Almost crying. But I try I’m not going to cry.”

Hull close with a 66 to make things interesting, while Nelly Korda finished third to cap a strong stretch of golf.

The other winners to close out the LPGA season were Korda, who successfully defended her title at the Taiwan Swinging Skirts LPGA presented by CTBC, and Suzuki at the Toto Japan Classic.

In Chinese Taipei, Korda lost a three-stroke lead at the start of the final round at Miramar Golf Country Club in New Taipei City, but birdied the first hole of a sudden-death playoff to beat Caroline Masson and Minjee Lee for her third career LPGA title. Korda became the third player on the LPGA to successfully defend a title in the Taiwan Swinging Skirts LPGA.

Meanwhile, there was a surprise winner at the Toto Japan Classic as Suzuki, a standout on the JLPGA Tour, gave the home fans something to cheer when she fired a final-round 67 for a three-stroke victory over Hyo Joo Kim at Seta Golf Club in Shinga, Japan. Suzuki played the final two rounds bogey free to finish at 17-under 199.

In men’s game, Rory McIlroy, voted PGA TOUR Player of the Year for his play in the previous season, got a win in the new one by capturing the WGC-HSBC Champions while Duncan claimed his first PGA TOUR title at the RSM Classic, the final event of the year. They joined Todd, who won twice and hogged the headlines, even in defeat.

McIlroy, No. 2 in the world and the reigning FedExCup champion, won his fourth TOUR event of the year by beating Xander Schauffele on the first playoff hole at Sheshan International in Shanghai for his 18thcareer PGA TOUR crown. McIlroy had a final-round 4-under 68, while Schauffele, the defending champion, shot 66 to each finish at 19-under 269.

In Mexico City, the amazing and inspirational Brendan Todd story rolled on as he won his second straight PGA TOUR start at the Mayakoba Golf Classic. He posted a one-stroke victory over Vaughn Taylor, Carlos Ortiz and Adam Long with a 20-under 264 total to become the first player to win consecutive Tour events since Bryson DeChambeau at the end of the 2017-18 season.

Todd’s first win came at the less-heralded Bermuda Championship, a new event played opposite the WGC-HSBC Champions. It came after Todd, 34, considered quitting golf because full-swing driver yips were eating into his confidence and ability to compete as he missed 37 of 41 cuts in one stretch.

But at the inaugural Bermuda Championship, Todd was brilliant in sending notice that he had rebuilt his game. He fired a closing 9-under 62 and beat Harry Higgs by four strokes with a 24-under 260 at Port Royal Golf Club in Southampton, Bermuda, for his first win since the 2014 Byron Nelson Classic.

Todd appeared unstoppable when he took the third-round lead at the RSM Classic at Sea Island Golf Club in St. Simons Island, Ga., with a sterling 62, but he ran out of gas in the final round, leaving Duncan and veteran Webb Simpson to duke it out.

After the two men finished at 19-under 263, Duncan, who birdied three of his final four holes in regulation, birdied the second playoff hole to capture his first TOUR title and qualify for the Masters for the first time at age 30.

Todd finished fourth at 16 under, while Sebastian Munoz was third.

The TOUR resumes its season Jan. 2 at the annual winners-only Sentry Tournament of Champions in Kapalua, Maui.