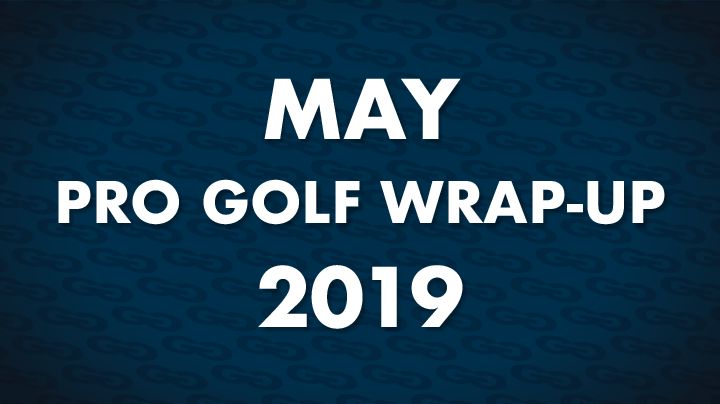 A major champion on the men’s tour was crowned in the month of May. It was Brooks Koepka. He seems to win majors no matter what month it is.

The PGA Championship moved to May to bring more cohesion and flow to the PGA TOUR schedule, and Koepka enjoyed defending his title from last August a bit earlier. He opened with a 7-under 63 at Bethpage Black, the very intimidating track in Farmingdale, N.Y., and led wire to wire to capture the 101stPGA.

Koepka, 29, of Jupiter, Fla., did something no one had ever done before. Already a two-time U.S. Open champion, Koepka added back-to-back PGA titles, becoming the first man to hold back-to-back major titles concurrently. It wasn’t easy as he began the final round with a seven-shot lead and had to hold off world No. 1 Dustin Johnson down the stretch. Koepka ended up winning by two shots with a final-round 4-over 74 that gave him an 8-under 272 total.

With four wins in his last eight major starts, he joined Tiger Woods, Jack Nicklaus and Ben Hogan as the only men in the modern era to win four or more majors in a span of just eight starts. “I mean, four of eight, I like the way that sounds,” said Koepka, who nearly won the Masters in April, finishing T-2 behind Tiger Woods.

Koepka took the rest of the month off after playing in the AT&T Byron Nelson prior to the PGA. That gave others a chance to shine. Sung Kang did just that in beating Koepka and others in a shootout at the Byron Nelson at Trinity Forest, while Max Homa won the Wells Fargo Championship to join Kang as a first-time PGA TOUR winner. Kevin Na took home the title at the Charles Schwab Challenge at venerable Colonial Country Club.

You can read about their respective triumphs here:

A great addendum to Na’s victory is that not only did he win for the third time, but he also showed his appreciation for his caddie by sharing the spoils of his four-shot victory.

On the LPGA Tour, a first-time winner, Bronte Law, stole the show at one of Global Golf Management’s favorite events – sponsored by one of our best partners – while Sei Young Kim, no stranger to victory (or to us or Pure Silk) found her way back into the winner’s circle.

Law, who was in the final pairing for the first time in her career on Sunday, handled the pressure of a crowded leaderboard, carding five birdies on the day to shoot her second straight 67 and finish at 17-under 267 at the River Course at Kingsmill Resort. Law captured her first win just three weeks after falling in a playoff at – of all tournaments – the LPGA MEDIHEAL Championship where Kim was the winner.

“I believe in hard work and determination. I really stayed so focused out there today,” Law said. “I guess after San Fran it really gave me perspective that I can compete at the top. I came in this week with the sole intention of getting that one better. It feels really good.”

Law’s reference to San Fran is in regards to the MEDIHEAL Championship at Lake Merced Golf Club in Daly City, Calif., not far from San Francisco. Kim, after a final-round 75, fell into a playoff with Law and Jeongeun Lee6. The trio finished at 7-under 281. Kim, a former Rolex Rookie of the Year, won her eighth LPGA title with a birdie on the first extra hole.

One of Kim’s wins came at the Pure-Silk Bahamas LPGA Classic.

Two of golf most prestigious events – the U.S. Women’s Open on the LPGA and the Memorial Tournament presented by Nationwide on the PGA TOUR – began in May but ended June 2. Stay tuned and check back again to read about those two exciting events with amazing finishes.