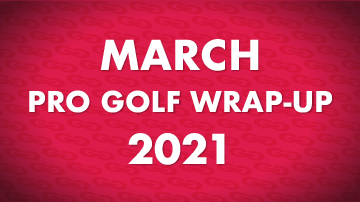 Welcome to the March Pro Golf Wrap-Up – everything you need to know in the world of golf expertly curated by your friends at Global Golf Management.

Justin Thomas won the crown jewel of the PGA TOUR and the biggest tournament in March, while Bryson DeChambeau, Billy Horschel, Matt Jones, and Joel Dahmen also were winners in men’s golf in the third month of 2021.

Thomas won for the 14th time, and added his second-biggest title after his 2017 PGA Championship by closing with a 4-under-par 68 and beating England’s Lee Westwood by a stroke to capture The PLAYERS at TPC Sawgrass in Ponte Vedra Beach, Fla.

With a 14-under 274 total, Thomas registered an emotional victory just a few weeks after his grandfather, Paul Thomas, passed away at age 89. The elder Thomas had been a lifetime PGA professional in Ohio who had competed in the 1960 and ’61 PGA and the 1962 U.S. Open at Oakmont, and he had been a huge supporter of his grandson.

“I kept telling everyone on my team or my family I’m ready for something good to happen this year,” Justin, 27, said.

Westwood, who held the 54-hole lead, shot 72, while Brian Harman and Bryson DeChambeau tied for third place in the game’s richest event. Harman closed with a 69 and DeChambeau had a 71. Westwood, 47, finished second for the second straight week.

In the week previous to The PLAYERS, in Orlando, Fla., DeChambeau was unstoppable, powering his way to victory in the Arnold Palmer Invitational at Bay Hill Club.

With a six-foot par putt on the 72nd hole, DeChambeau, the reigning U.S. Open champion, carded a 1-under 71 amid difficult breezy conditions (one of only three sub-par rounds on the day) and edged Westwood by a stroke. DeChambeau finished at 11-under 277 on the Championship Course at Bay Hill Club.

Westwood shot 73 in his attempt to become the first player in TOUR history to go 10 years or more between victories two different times. Canada’s Corey Conners shot 74 for third place.

Matt Jones of Australia won his second PGA TOUR title nearly seven years after his first in cruising to a five-stroke victory in the Honda Classic in Palm Beach Gardens, Fla. Jones, who opened with a 61 on Thursday to take the first-round lead, recaptured the top spot after 72 holes thanks to a closing 2-under 68 on the Champion Course at PGA National.

The 40-year-old veteran posted a 12-under 268 aggregate score, five strokes better than rookie Brandon Hagy, who carded the best score of the final round, a 66, that enabled him to post his career-best finish.

Billy Horschel struggled in the final of the WGC-Dell Match Play Championship, making only on birdie, but that was enough as the 34-year-old won his first World Golf Championship by beating Texan Scottie Scheffler, 2 and 1, at Austin Country Club in Austin, Texas.

Horschel, who came in under the radar as the No. 32 seed, won his sixth PGA TOUR title and his first in nearly four years. He never lost a match in the five-day competition.

Matt Kuchar, a former match play winner, defeated Victor Perez of France in the consolation match, 3 and 2, for third place.

At Punta Cana in the Dominican Republic, in an event played opposite the WGC tournament, Joel Dahmen won his first PGA TOUR title in his 111th start, edging past Rafael Campos by a stroke in the Corales Puntacana Resort & Club Championship.

Dahmen, 33, closed with a 2-under 70 on the windswept seaside course for a 12-under 276 total. Campos, who shot 71, lipped out for a tying birdie on the 72nd hole from 18 feet that would have forced a playoff. He settled for his best career finish, a tie for second with Sam Ryder, who fired a Sunday 67.

On the LPGA Tour, there were two events, the LPGA Drive On Championship presented by Volvik at Golden Ocala, won by Austin Ernst, and the Kia Classic, taken by Inbee Park.

Ernst, 29, won the Drive On Championship in Ocala, Fla., for her third LPGA Tour title, making her the third American player in a row to win on the LPGA to start the season, the first time that had happened in 14 years. She beat Jennifer Kupcho by five strokes at Golden Ocala with a 15-under 273 total that included a final-round 70. Kupcho closed with a 74.

In Carlsbad, Calif., Park, 32, won in wire-to-wire fashion at Aviara Golf Club, closing with a 2-under-par-70 to win in her first event of 2021 and to register her 21st LPGA victory.

Ranked fourth in the world, Park finished at 14-under 274 and cruised to a five-stroke victory over Amy Olson and Lexi Thompson. The win tied her with LPGA founding member Marilynn Smith for 25th on the career victory list. Olson closed with a 68 while Thompson shot 69.