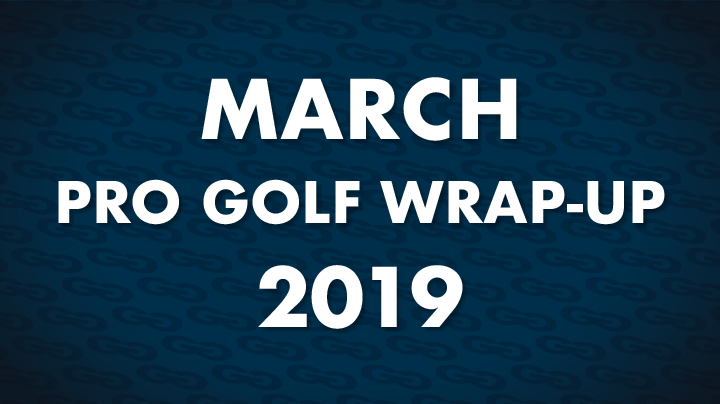 Welcome to the March Pro Golf Wrap-Up – everything you need to know in the world of golf expertly curated by your friends at Global Golf Management.

This is it. The last month on the golfing calendar without a major being contested, at least for a while. April brings both the first men’s major, the Masters Tournament, and the first women’s major the week before that at the ANA Inspiration on the LPGA Tour.

But that didn’t mean there wasn’t meaningful golf played in March. The Players was held in March for the first time since 2006, and the game’s so-called fifth major was captured by Rory McIlroy. There also was a World Golf Championship contested (that we helped put on operationally) in Austin, Texas, and it was Kevin Kisner winning the WGC-Dell Technologies Match Play Championship.

Other winners in March on the PGA TOUR included Keith Mitchell at the Honda Classic, Francesco Molinari at the Arnold Palmer Invitational presented by MasterCard, Paul Casey repeating at the Valspar Championship, and Graeme McDowell at the Corales Puntacana Resort & Club Championship.

In case you hadn’t noticed, the month featured an unprecedented four-week run of European-born winners.

On the women’s side, there were two events and both winners claimed their third career LPGA titles. Jin Young Ko, the reigning Louise Suggs Rolex Rookie of the Year winner, captured the Bank of Hope Founders Cup (another event at which we assisted). The following week, to wrap up the month of March, Nasa Hataoka was the champion at the Kia Classic.

To start the roundup, consider what Rory McIlroy had done in his previous five starts, all sixth-place finishes or better, before he held off Jim Furyk to win his 15th PGA TOUR title on March 17th in Ponte Vedra Beach, Fla. The native of Northern Ireland shot a closing 70 at the famed Stadium Course at TPC Sawgrass and completed 72 holes in 16-under 272 to win The Players in his 10th try.

He emerged from a shootout in which eight different players had at least a share of the lead at one point in the final round.

“I almost liked today because it was tough,” McIlroy, 29 said after his 23rd career win world-wide. “I knew guys weren’t going to get away from us. I knew there was some chances coming up. I stayed patient. Anytime I looked at a leaderboard, I was pleasantly surprised because I hadn’t fallen two, three, four shots behind.”

Following in McIlroy’s footsteps, Francesco Molinari won the Arnold Palmer Invitational with a final-round 8-under-par 64 at Bay Hill Club and Lodge, the exact score McIlroy shot the year before in winning Palmer’s tournament. Molinari capped off his brilliant final round with a long birdie putt that elicited a Tiger Woods-like fist pump and put him in the clubhouse at 12-under 276. No one could catch him as the winner of last year’s Open Championship claimed his fourth world-wide win in less than 10 months.

The Europeans made it three wins in a row the week after The Players when Paul Casey, despite a 1-over-par 72, hung on to repeat as winner of the Valspar Championship in Palm Harbor, Fla. The Englishman, 41, finished at 8-under 276 at the Copperhead Course at Innisbrook Resort to hold off Louis Oosthuizen and Jason Kokrak by a stroke for his third PGA TOUR title.

And then came Graeme McDowell with a fourth straight week of European conquest. Also from Northern Ireland, McDowell, the former U.S. Open winner, fought off several challengers to hang on for his first win in three years with a final-round 69 and 18-under 270 effort at Corales Golf Club in the Dominican Republic. Like other results in March, this was a nail-biter, as McDowell beat Chris Stroud and MacKenzie Hughes by a shot.

The month of March started and ended with Americans holding the trophy.

At the Honda Classic, Keith Mitchell sank a 15-foot birdie putt on the 72ndhole at PGA National Resort and Spa for his first career PGA TOUR win, and he beat two of the game’s bigger names to do it, edging three-time major winner Brooks Koepka and former Players champion Rickie Fowler – both ranked in the top-10 in the world – by one stroke.

Mitchell finished at 9-under 271 thanks to a closing 67 at the difficult Champion Course at PGA National.

Finally, Kevin Kisner beat fellow American Matt Kuchar, 3 and 2, to claim the month’s other big prize, the WGC-Dell Technologies Match Play Championship at Austin Country Club in Austin, Texas. The win was Kisner’s third of his career and avenged an 8-and-6 blowout at the hands of Bubba Watson in last year’s final at the same venue.

The LPGA returned to the USA after some time away, but it was a pair of international players who enjoyed the American scene, starting with Jin Young Ko fighting off several contenders to win the Bank of Hope Founders Cup at Wildfire Golf & Country Club in Phoenix, Ariz. Ko posted 22-under 266 thanks to a closing 7-under 65. She played the weekend without a bogey.

Finishing tied for second just one stroke back were the Korda sisters, Nelly and Jessica, along with Carlota Ciganda and Yu Liu.

Ko was in the mix again at the Kia Classic, but was Nasa Hataoka who emerged with the title. The 20-year-old from Japan won for the first time in a 72-hole event after shooting a 67 and finishing at 18-under 270 at Golf Club in Carlsbad, Calif.