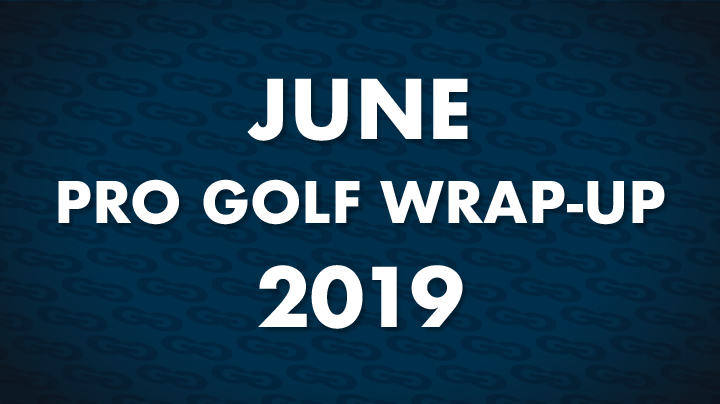 Welcome to the June Pro Golf Wrap-Up – everything you need to know in the world of golf expertly curated by your friends at Global Golf Management.

Usually, the news of three more major winners being crowned would be at the top of our roundup of June, but we just assisted in helping to operate the inaugural Rocket Mortgage Classic in Detroit, and it was something to behold.

Nate Lashley was the last man in the field, getting in as an alternate when David Berganio withdrew. He went on to win the tournament in runaway fashion, his first victory on the PGA TOUR at the age of 36. Lashley’s story is even more amazing than that, for it has been a long journey for the Nebraska native, who has had to overcome a devastating tragedy to finally make it as a PGA TOUR winner.

Ranked No. 353 in the world, Lashley fired 2-under-par 70 in the final round at Detroit Golf Club and finished at 25-under 263, six shots ahead of the field.

“I was just happy to get in this week, and to end up winning is just a dream come true,” he said Sunday.

The attached story gives the amazing details of Lashley’s victory, coming 15 years after he suffered a devastating loss.

The month of June saw three majors contested, two on the LPGA Tour. All three were captured by players who previously hadn’t won a major. And in the case of the women’s game, the champions were Rolex first-time winners.

First, on the PGA TOUR, Gary Woodland won the U.S. Open at Pebble Beach Golf Links, leading after each of the final three rounds. He held off Brooks Koepka by three strokes as Koepka was attempting to become the second player to win the national championship three times in a row. Woodland, 35, a Kansas native, finished at 13-under 271, the lowest score ever at a U.S. Open at Pebble Beach – one shot better than Tiger Woods’ historic rout in 2000.

Two weeks earlier, at the Country Club of Charleston, in South Carolina, Jeongeun Lee, a 23-year-old South Korean, won her first major title by shooting a final-round 70 and beating a trio of contenders by two strokes. The win, her first on the LPGA Tour, came five days after her 23rdbirthday. She finished a 6-under 278 and won the first $1 million women’s winner’s check ever handed out by the USGA. “This is kind of really interesting how I finished 6 under at an LPGA tournament,” Lee said through an interpreter. “So, this is really lucky number to me.”

Australian Hannah Green joined Lee as a first-time winner and became the third Aussie to win a women’s major after Karrie Webb and Jan Stephenson. Green saved par from a bunker with a 5-foot putt on the final hole at Hazeltine National to beat Sung Hyun Park by one stroke. She finished a 9-under 279.

Green became the first wire-to-wire winner of the championship since Yani Tseng in 2011, and she became the third player in the last five majors contested to make her first LPGA victory a major title.

Elsewhere on the LPGA, more familiar names won titles. Lexi Thompson won the Shoprite LPGA Classic presented by Acer, Brooke Henderson captured the Meijer LPGA Classic for Simply Give to set a record for wins by a Canadian-born player, and Sung Hyun Park was the champion at the Walmart NW Arkansas Championship Presented by P&G.

In Galloway, N.J., a birdie-eagle finish gave Lexi Thompson her 11th LPGA title at the Shoprite LPGA Classic, as she won at least once for the seventh year in a row, beating Lee by a stroke. Thompson was among the three players Lee beat in the U.S. Women’s Open. Thompson finished at 12-under-201 at Seaview Bay Course.

Henderson’s win at the Meijer LPGA Classic in Grand Rapids, Mich., gave her nine career wins, including her second this year as he broke a tie with Sandra Post and also moved past George Knudson and Mike Weir for the most wins by any Canadian player.

“That’s really cool,” said Henderson, who closed with a 2-under 70 at Blythefield Country Club in winning wire to wire with a 21-under 267 total. “Earlier this year to get my eighth win and to tie that record was a huge deal for me. To kind of breakthrough that is awesome. I’m just really excited for the rest of the summer and hopefully many more wins in the future.”

Park was disappointed in the near miss in the KPMG Women’s PGA Championship, but she bounced back at the at the Walmart NW Arkansas Championship, firing a closing 5-under 66 at Pinnacle Country Club in Rogers, Ark., for a one-stroke victory. Park finished at 18-under 195, for her seventh career LPGA title that put her back on top of the Rolex Women’s World Rankings.

On the men’s side, Rory McIlroy and Patrick Cantlay warmed up for the U.S. Open with remarkable finishing bursts at the RBC Canadian Open and the Memorial Tournament, respectively.

At Hamilton Golf & Country Club in Hamilton, Ontario, McIlroy’s won his fifth different national open, thanks to a 64-61 weekend performance. The 61 equaled the low round of his career as he finished with a record 22-under 258 total and won for the 16thtime on the PGA TOUR and for the second time this season.

In Dublin, Ohio, Cantlay fired the lowest final round by a winner in the history of the Memorial Tournament presented by Nationwide to rally past Martin Kaymer and Adam Scott for his second career title. Cantlay, 25, credited Memorial founder and host Jack Nicklaus with some timely advice in helping him collect the two-shot win over Scott. He closed with an 8-under 64 and ended up at 19-under 269, one stroke off the tournament record.

Finally, there was Chez Reavie, 37, who won for the second time in his career 11 years and 250 events after winning his first PGA TOUR title. His closing 1-under 69 at TPC River Highlands in Cromwell, Conn., was more than enough for a four-stroke victory over Keegan Bradley and Zach Sucher. One week after tying for third at the U.S. Open for his best finish in a major, Reavie shot 17-under 263 to break his winless streak after capturing the 2008 Canadian Open.

“It means everything,” Reavie said. “I went through some injuries, had some long years there in the middle. But it was great, because it gave good perseverance and good perspective of what life is and what golf is.”