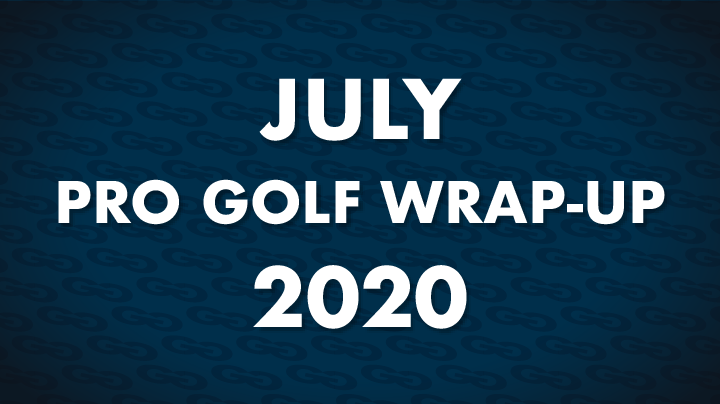 Golf is back! Welcome to the July Pro Golf Wrap-Up – everything you need to know in the world of golf expertly curated by your friends at Global Golf Management.

Professional golf returned from a self-imposed hiatus in mid-June in Fort Worth, Texas, at the Charles Schwab Challenge at Colonial Country Club, and it immediately set a tone with great winners, starting with Daniel Berger at Colonial. Winners who followed after that in June were Rory McIlroy, Webb Simpson and Dustin Johnson to close out the month after the cancellation of nine PGA TOUR events due to the COVID-19 threat.

July became the first full month of TOUR competition since February, and the month featured another lineup of fine winners, starting with Jon Rahm winning the Memorial Tournament presented by Nationwide to take over the No. 1 spot in the world ranking. The victory at Muirfield Village Golf Club came in the second of two weeks at the same venue, as Muirfield Village also hosted the Workday Charity Open the week earlier, an event that replaced the canceled John Deere Classic. It had been nearly 60 years since one venue hosted two TOUR events in the same year.

Over the Fourth of July weekend, there were fireworks of a sort as Bryson DeChambeau bombed his way to victory in the Rocket Mortgage Classic in Detroit. The long-hitting California native posted his sixth victory on the PGA TOUR with a three-stroke triumph over second-year pro Matthew Wolff.

DeChambeau carded a 7-under-par 65 at Detroit Golf Club and finished with a career-best 23-under 265 total. a, who began the day with a three-shot lead, closed with a 71. Kevin Kisner finished third.

From Detroit, the TOUR headed south a bit for a two-week stay in Columbus, Ohio, starting with the Workday Charity Open. Muirfield Village was set up for scoring, and Collin Morikawa and Justin Thomas ended up in a playoff after each man finished at 19 under par 269. On the third playoff hole, the par-4 10th, Morikawa needed only a par to emerge with his second TOUR victory.

The next week, things got a lot more difficult with faster greens and considerably higher rough around the course, and the Memorial Tournament ended up being more a survival test that Jon Rahm eventually passed.

The Spaniard looked to be cruising to his fourth PGA TOUR title, but things got dicey down the stretch before he beat Ryan Palmer by three shots with a closing 75 and 9-under 279 total that included a two-stroke penalty. With his 11th worldwide win, Rahm rose to world No. 1. At 25 years of age, he became the fifth-youngest to reach the top of the world rankings, and he joined the late Seve Ballesteros as the only Spanish-born players to become world No. 1.

The month wrapped up with unheralded Michael Thompson capturing the 3M Open in Blaine, Minn., for his second win on the PGA TOUR – coming seven years after his first.

Ranked 218th in the world, Thompson, 35, beat Adam Long by two shots at TPC Twin Cities after birdies on two of his last three holes gave him a 4-under 67 and 19-under 265 total. The first of those two closing birdies came after an amazing bunker shot from 37 yards that settled within a few feet. It was the shot of the tournament and made a winner of a player who previously had only four top-3 finishes in 227 career starts.