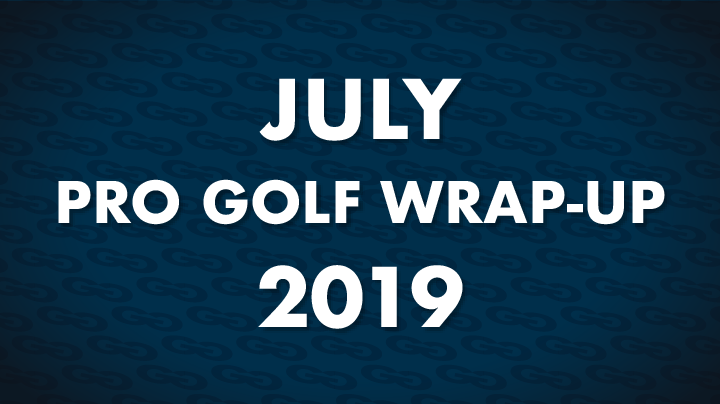 Welcome to the July Pro Golf Wrap-Up – everything you need to know in the world of golf expertly curated by your friends at Global Golf Management.

The major breakthroughs just kept coming in the month of July with Shane Lowry the latest to join the club by winning the Open Championship at Royal Portrush. Meanwhile, newcomers Matthew Wolff and Collin Morikawa put on major displays of precociousness and poise to shake up the PGA TOUR picture.

On the LPGA major scene, things were a bit more familiar as Jin Young Ko won her second major of the year at the Evian Championship.

While it would be difficult to beat the feel-good stories of Tiger Woods’ comeback at the Masters or Nate Lashley’s victory at the inaugural Rocket Mortgage Classic, Shane Lowry’s win in the 148th Open Championship comes close. The native of Ireland was unstoppable in capturing the first Open contested in Ireland since 1951 at the same historic venue.

With a 1-over-par 72 amid wind and bouts of rain, Lowry, 32, won his first major championship in style, posting a six-stroke triumph in front of a very happy partisan crowd. He completed 72 holes in 15-under 269. Tommy Fleetwood of England was the runner-up after posting 74-275.

A 15-under 269 total also was good enough for Jin Young Ko to win as she captured the Evian Championship in a rain-swept final round in ÉVIAN-LES-BAINS, France. Ko fired a final-round 4-under 67 at Evian Resort Golf Club. The 2018 LPGA Rookie of the Year won by two strokes over Shanshan Feng, rookie Jennifer Kupcho and Hyo Joo Kim, who had control of the championship until suffering a triple-bogey on the par-3 14th hole.

“Last night I thought if I play a really good (final round) I can win,” Ko said after winning her fifth LPGA title and regaining the No. 1 spot in the Rolex Women’s World Rankings. “So, I played really … not perfect, but a little bit – yeah, little perfect. So, I was happy.”

In chronological order, the other PGA TOUR champs in July were the aforementioned Wolff at the inaugural 3M Open, Dylan Fritelli, another first-time winner, at the John Deere Classic, Jim Herman at the Barbasol Championship, Morikawa at the Barracuda Championship and Brooks Koepka at the WGC-FedEx St. Jude Invitational.

The recently crowned collegiate player of the year, Wolff, just 20 years old, broke through in style, making eagle on the final hole to leapfrog over Bryson DeChambeau for one of the more exciting finishes of the season. He finished at 21-under 263 at TPC Twin Cities in Blaine, Minn., to beat both DeChambeau and his college rival Morikawa.

Morikawa’s win came at the end of the month, when he scored 47 points, thanks to birdies on four of the last five holes, in the Stableford format to capture the Barracuda Championship by three points over third-round leader Troy Merritt at Montreux Golf & Country Club in Reno, Nevada.

Morikawa, 22, finished in the top four in his third straight start and like Wolff earned his PGA TOUR card right out of college.

Another first-time winner broke through at the John Deere Classic in Silvis, Ill. Dylan Fritelli of South Africa, who was a former teammate on the University of Texas golf team with Jordan Spieth, fired a 7-under 64 at TPC Deere Run, to win for the first time. Fritelli beat Russell Henley by one shot with a 21-under 263 total and in the process qualified for the Open Championship in Ireland.

Opposite the Open Championship was the exciting Barbasol Championship, an event that GGM not only operates but also helped to get off the ground six years ago.

Jim Herman was the winner thanks to a final-round 2-under 70 at Keene Trace Golf Club in Nicholsville, Ky., to defeat Kelly Kraft by one shot. Herman, an Ohio native who once served as a club pro at one of President Donald Trump’s golf courses in New Jersey, finished at 26-under 262. It was his second PGA TOUR title, and it came despite cooling off after rounds of 65-65-62.

Finally, Brooks Koepka did more than just win his first World Golf Championship in Memphis at the –free WGC-FedEx St. Jude Invitational. He also solidified his hold on the No. 1 spot in the world ranking and secured the regular season No. 1 seed in the FedEx Cup standings, worth a $2 million bonus from the Wyndham Rewards Program.

Koepka was unflappable in the final round, outplaying his playing partner Rory McIlroy by shooting a bogey-free 5-under 65 at TPC Southwind to finish with a 16-under 264 aggregate total. The win was his seventh on the PGA TOUR.

McIlroy shot 71 to fall back into a tie for fourth as Webb Simpson finished second after a 64 and Marc Leishman shot 67 to end up third.

In other July results on the LPGA, Shanshan Feng won the Thornberry Creek LPGA Classic, Sei Young Kim captured the Marathon Classic presented by Dana, and in the inaugural Dow Great Lakes Bay Invitational, a team event, the winning team was the pairing of Jasmine Suwannapura and Cydney Clanton.

Feng won the first event of the month by firing a final-round 63, tying her career low, and captured her 10thLPGA title to end a nearly two-year drought. She finished with a 29-under 259 total at Thornberry Creek in Oneida, Wis., the second-lowest 72-hole score in relation to par in LPGA history. Despite the torrid scoring, Feng only one by a stroke over Ariya Jutanugarn, who closed with her second 64 of the week.

In Sylvania, Ohio, Sei Young Kim won the Marathon Classic by two strokes over Lexi Thompson after a final-round 6-under 66 at Highland Meadows Golf Club. Kim, who finished with a tournament-record 22-under 262, won for the ninth time in her career.

Thanks to a final-round 59 in four-ball, Jasmine Suwannapura and Cydney Clanton won by a comfortable six strokes over Minjee Lee and the aforementioned Jin Young Ko, who combined for 16 birdies, with Lee shooting an 8-under 62 on her own ball.