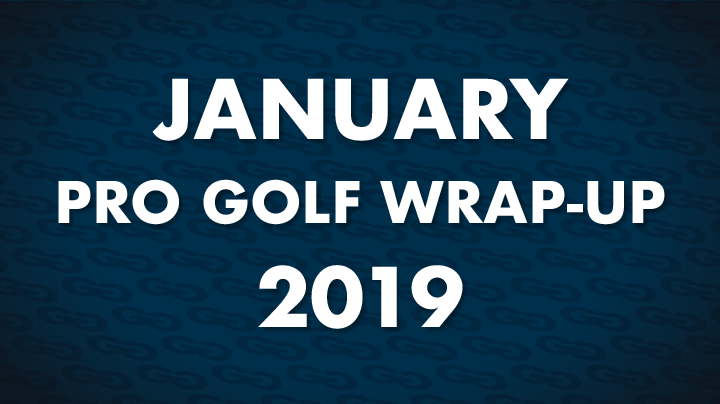 Welcome to the January Pro Golf Wrap-Up – everything you need to know in the world of golf expertly curated by your friends at Global Golf Management.

Some of the game’s hottest players stayed hot and one PGA TOUR winner was a true longshot to highlight golf results in the month of January.

The hot players were Xander Schauffele, who fired a final-round 62 to win the Sentry Tournament of Champions, Matt Kuchar, who captured the Sony Open in Hawaii, and Justin Rose, who solidified his standing as the No. 1 player in the word by hanging on to claim his 10thPGA TOUR title at the Farmers Insurance Open.

Already a come-from-behind winner in the fall at the WGC-HSBC Champions, when he chased down Tony Finau and then won in a playoff, Schauffele pulled off a more miraculous victory at the Plantation Course at Kapalua Resort in Maui with his final-round explosion that was good for an outright one-stroke victory over a stunning Gary Woodland.

Schauffele, 25, finished at 23-under 269, tying the course record held by four others, and won his fourth PGA TOUR title. The 2017 PGA TOUR Rookie of the Year also set a tournament record for lowest final round by a winner, previously held by Sergio Garcia, whose 2002 win featured a closing 64.

“Honestly a bit speechless. It was a crazy day,” said Schauffele, who began the final round five strokes behind Woodland and was six back after he bogeyed the opening hole before going on to post his career low as a professional. “It’s by far the best final round I ever played, I can tell you that much.”

There was nothing crazy about Matt Kuchar’s ninth win on the PGA TOUR as he held on after a slow start to post a 4-under 66 and a four-stroke win over Andrew Putnam at Waialae Country Club in Honolulu. Kuchar, who had ended a four-year victory drought at the Mayakoba Classic in November, finished at 22-under 258 after finishing in the top-10 in the Sony Open four of the previous five years.

Similarly, Justin Rose survived a bit of a rocky stretch but eventually posted a final-round 3-under 69 on the South Course at Torrey Pines Golf Course to hold off Adam Scott in La Jolla, Calif.

The No. 1 player in the world showed why he is tops in the game, shooting 21-under 267 on the North (for one round) and South Courses for the lowest aggregate score in the event since the South Course was renovated in 2000. The reigning FedEx Cup champion, Rose has the most wins by an Englishman on the PGA TOUR since World War II. In his last 21 starts in America, he has 13 top-10 finishes.

And now for the long shot. That would be Adam Long, who converted a 14-foot birdie putt on the 72ndhole at the Stadium Course at PGA West to beat Phil Mickelson and Adam Hadwin at the Desert Classic in Palm Desert, Calif. Long, 31, a Duke University product, won his first PGA TOUR title and only his second event as a professional by shooting a final-round 7-under 65. He finished at 26-under 262.

Mickelson was vying for his third win in the event and the 44thof his career after opening the tournament with a 12-under-par 60. He entered the final round with a two-stroke lead but couldn’t seal the deal despite a closing 69.