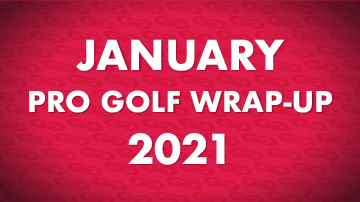 Welcome to the first Pro Golf Wrap-Up for 2021 – everything you need to know in the world of golf expertly curated by your friends at Global Golf Management.

The PGA TOUR was busy at the start of the new year while the LPGA had but one event, but the competition was strong and the play quite excellent, and golf saw worthy winners emerge. Especially of note were the respective winners of the “tournament of champions” events on each tour, as they were won by players who hadn’t won the year before.

And each player, Harris English and Jessica Korda, won in a playoff.

That’s called opportunism, and it was fun to watch.

English, 31, won his third PGA TOUR title and his first since 2013 when he captured the Sentry Tournament of Champions Jan. 10 in Maui, Hawaii, beating Joaquin Niemann on the first hole of a sudden-death playoff.

English, who closed with a 69 and then sank a 6-foot birdie putt on the first extra hole, won an event he ordinarily wouldn’t be allowed to play and hadn’t qualified for since 2014. The Tournament of Champions at Kapalua’s Plantation Course is for winners only from the previous year, but the field was expanded for 2021 to include anyone who reached the Tour Championship because of the COVID-19 pandemic that shut down golf for three months in 2020. He finished at 25-under 267, as did Niemann after a 9-under 64.

Meanwhile, the LPGA had the last major of 2020 when Kim A-lim birdied the final three holes to capture the U.S. Women’s Open in December at Champions Golf Club in Houston. It then had the most exciting event of the first month of 2021 when Korda rallied to win the Diamond Resorts Tournament of Champions in Lake Buena Vista, Fla.

Korda, who fired a third-round 60, drained a 25-foot birdie on the first sudden-death playoff hole to defeat Danielle Kang after beginning the day two strokes behind. Korda shattered the tournament scoring record with a four-day total of 24-under 260, besting the previous mark of 14-under 270 set by Eun Hee Ji in 2019. Korda shot a final-round 5-under 66 at Four Seasons Golf and Sports Club Orlando to pocket $180,000 with her sixth career win. Kang had a final-round 68.

In Honolulu, Na won for the fourth straight season thanks to a birdie on the 72nd hole at Waialae Country Club for a one-stroke victory in the Sony Open in Hawaii. His final-round 65 gave him a 21-under 259 total, while Chris Kirk and Joaquin Niemann tied for second at 260. Kirk also shot 65 while Niemann was runner-up for the second straight week after a 66, giving him a combined score of 45 under par in the two Hawaii stops without a win.

California native Patrick Cantlay shot a final-round 61 at The American Express, which looked good enough to give him the victory in La Quinta, Calif., but Kim, who held a share of the third-round lead, birdied two of his last three holes at PGA West to eke out a one-shot win.

At Torrey Pines, site of the upcoming U.S Open in June, Patrick Reed dominated the Farmers Insurance Open, firing a final-round 4-under 68 for a five-shot victory, joining Tiger Woods as the only players in the current century to win the event in suburban San Diego, Calif., by four shots or more.

Reed, the third-round leader who was involved in a rules controversy the day before but was exonerated by TOUR officials, completed 72 holes in 14-under-274. He won for the ninth time on the PGA TOUR. Tony Finau, Ryan Palmer, Henrik Norlander, Viktor Hovland and San Diego native Xander Schauffele all tied for second.