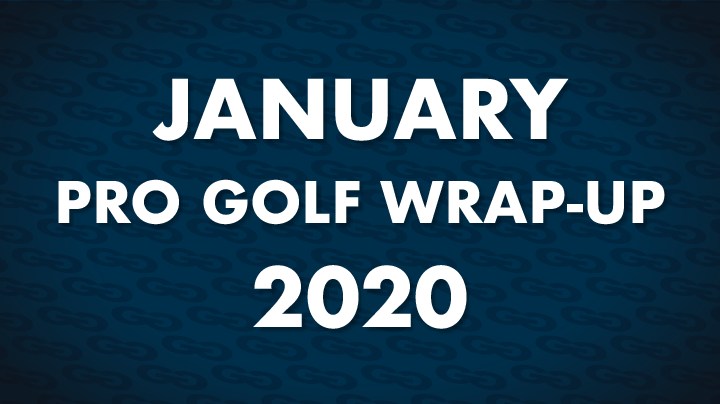 Welcome to the January Pro Golf Wrap-Up – everything you need to know in the world of golf expertly curated by your friends at Global Golf Management.

Exciting and highly competitive golf was the story of the American professional tours in the first month of the new decade.

It all began, as it does every year, at the Sentry Tournament of Champions, and a familiar name came out on top. Of course, any of the three men locked in the sudden-death playoff would have been familiar to winning at Kapalua Resort’s Plantation Course as they all had won the event previously. But Justin Thomas was the man who came out on top against Patrick Reed and defending champion Xander Schauffele in an extended finish that used every last bit of daylight.

Other winners in January on the PGA TOUR were Cameron Smith at the Sony Open in Hawaii – after beating Brendan Steele in a playoff – Andrew Landry at the newly named American Express in Palm Desert, Calif., and Marc Leishman at the Farmers Insurance Open in San Diego.

On the LPGA Tour, there were two events, and one of those went to a playoff as well. A long one. Gaby Lopez outlasted Nasa Hataoka and Inbee Park after seven extra holes to win the season-opening Diamond Resorts Tournament of Champions presented by IOA. The following week, Hataoka found herself a runner-up again as Madelene Sagstrom won the Gainbridge LPGA at Boca Rio.

On the 18thhole at Kapalua, the third extra hole, Thomas sank a 3-foot birdie putt in near darkness to beat Reed, while Schauffele could only watch after being knocked out on the first playoff hole. Thomas, who won at Kapalua in 2017, had bogeyed two of his last three holes for a closing 4-under 69 and 14-under 278 total. Schauffele, the third-round leader, shot 70 for the tie. Reed got into the playoff Thanks to a bogey-free 7-under 66.

In the end, Thomas claimed his 12thcareer PGA TOUR title and third in his last six official events. At 26 years of age, the Kentucky native joined Sam Snead, Jack Nicklaus and Tiger Woods with a dozen victories before age 27.

As the TOUR moved from Maui to Oahu for the Sony Open in Hawaii, the playoff bug continued as Cam Smith got past Brendan Steele after one extra hole at Waialae Country Club in Honolulu.

Smith capped a 2-under 68 with an 8-foot birdie putt on the 72ndgreen to tie Steele at 11-under 269, and then his two-putt par on the first playoff hole, the short par-4 10th, was good enough for the win. Steele, who led alone on a rainy Sunday until the final hole, closed with a 71.

A third playoff in a row was avoided at the American Express when Andrew Landry blew a six-stroke lead on the back nine at PGA West and then birdied the last two holes for a two-stroke win over Abraham Ancer. Landry’s second PGA TOUR title was retribution for losing a playoff to Jon Rahm two years earlier in the same event. He finished at 26-under 262 while Ancer’s 264 total included a final-round 63, tying the course record.

Speaking of Rahm, he could have also forced a playoff the next week at the Farmers Insurance Open, but his eagle putt on the 18thhole at the South Course at Torrey Pines came up a few inches short. That enabled Marc Leishman to record his fifth PGA TOUR win with a one-stroke victory after carding a final-round 7-under 65.

Leishman, who finished at 15-under 273, won, appropriately, on Australia Day. It also came on a somber day in the sports world after the news that former NBA great Kobe Bryant had perished in a helicopter accident.

In the women’s game, the season-opening Diamond Resorts Tournament of Champions ended with a playoff, just like the men’s opener. Gaby Lopez of Mexico took the title at the Four Seasons Golf & Sports Club Orlando in Lake Buena Vista, Fla., after a marathon seven-hole playoff that spilled into an extra day, ending on Monday.

Lopez rolled in a 30-foot birdie putt to finally subdue Nasa Hataoka of Japan for her second LPGA victory. The two finished 72 holes 13-under-par 271 with Lopez converting an-18-foot birdie try on the last hole of regulation to complete a 5-under 66 for a tie with Hataoka and Inbee Park, the third-round leader. Park shot 71 in the final round, while Hataoka had a 68.

The excitement continued at the Gainbridge LPGA at Boca Rio in Boca Raton, Fla., when Madelene Sagstrom broke through for her maiden LPGA triumph. Sagstrom birdied the 17thhole to gain a tie with Hataoka and then making a crucial par on the last while Hataoka bogeyed, missing a three-footer to force yet another bout of extra holes.

Sagstrom, of Sweden, finished with a 2-under 70 and 17-under 271 total at Boca Rio Golf Club while Hataoka, who had taken the lead with birdies at 15 and 16, shot a 69 for her second straight runner-up finish. Sagstrom, 27, became the 12thplayer from Sweden to win an LPGA event.