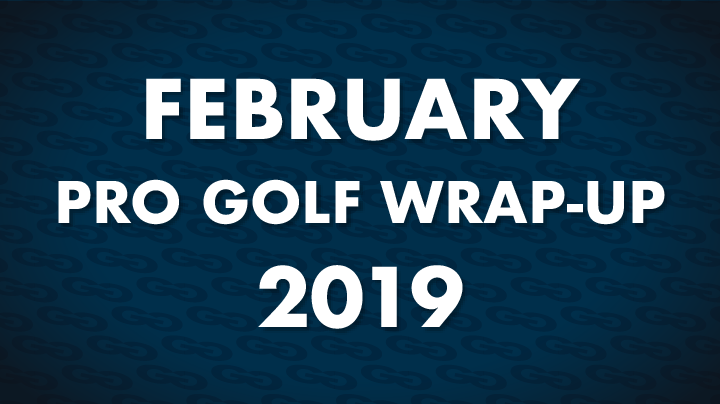 Welcome to the February Pro Golf Wrap-Up – everything you need to know in the world of golf expertly curated by your friends at Global Golf Management.

February was largely a good month on the PGA TOUR for familiar faces in the winner’s circle, while fresher faces were more the order of day on the LPGA Tour.

Martin Trainer was the most notable player bucking that trend. The PGA TOUR rookie was the last man standing at the Puerto Rico Open, which returned after a one-year hiatus because of the devastation in late 2017 from Hurricane Maria that forced the cancellation of the event in 2018. The reboot of the popular TOUR stop was welcome by all the participants, but Trainer was the man who most enjoyed it when he shot 15-under 273 for a three-stroke victory.

Managed and run by Global Golf Management, the Puerto Rico Open had an exciting finish in which at least a half-dozen players had a chance to win it. In the end it was Trainer, playing in just his 11th TOUR event, who fired a 5-under-par 67 at Coco Beach Golf and Country Club to pull away from a crowded leaderboard. He won $540,000 by beating the likes of veterans like Aaron Baddeley and Daniel Berger down the stretch.

It was impressive stuff and a great way for the Puerto Rico Open to return to prominence in the golf world.

Other winners in February were much more familiar. But there was no victory more entertaining or sensational than Phil Mickelson’s triumph in the AT&T Pebble Beach Pro-Am.

Mickelson, at age 48, played a flawless final round at Pebble Beach Golf Links despite weather delays that pushed the finish into Monday morning. His bogey-free 7-under-65 blew past third-round leader Paul Casey. The left-hander won his 44thPGA TOUR title after finishing at 19-under 268. Five times he has won at Pebble.

The event that Mickelson won a year ago, the WGC-Mexico Championship, belonged to Dustin Johnson for the second time in three years. Johnson, who was to become No. 1 in the world after beating Rory McIlroy by five strokes, carded a closing 5-under 66 at Club de Golf Chapultepec to notch his 20th career PGA TOUR title.

J.B. Holmes won the Genesis Open for his first PGA TOUR title in three years on a marathon day when he had to play 34 holes due to a long weather delay the first day that pushed everything back. He rallied past Justin Thomas thanks to a 1-under-par 70 at historic Riviera Country Club and finished at 14-under 270, one ahead of Thomas, who lost a four-stroke lead after 54 holes. Thomas had completed a morning 65 while Holmes had a 68 in the dank and chilly conditions.

If Mickelson’s win was a popular one, so was that authored by Rickie Fowler in the Waste Management Phoenix Open. Fowler notched his fifth career title despite a 3-over 74 in the final round at TPC Scottsdale. At 17-under 267, Fowler beat Branden Grace by two shots.

France’s Boutier carded an even-par round of 72 to win the Vic Open by two strokes in Barwon Heads, Australia. With three birdies and three bogeys, Boutier finished at 8-under 280, two strokes ahead of Australian duo Sarah Kemp and Su Oh and England’s Charlotte Thomas.

South Korea’s Amy Yang obviously loves Thailand. In Chonburi, Yang won the Honda LPGA Thailand thanks to an impressive 7-under 65 and 22-under 266 total at Siam Country Club. She beat Minjee Lee by a single shot for her fourth LPGA title overall.

The coolest win of the month belonged to American Nelly Korda, who added to the “Korda Slam” with her win in the Women’s Australian Open in Adelaide after a fine closing 5-under 67 at The Grange. She finished at 17-under 271, two ahead of South Korea’s Jin-Young Ko.

Korda is the daughter of former tennis player Petr Korda who won the 1998 Australian Open men’s singles title. Her sister, Jessica, won the same event in 2012 for her first LPGA title, while her brother, Sebastian, won the tennis junior singles title last year.