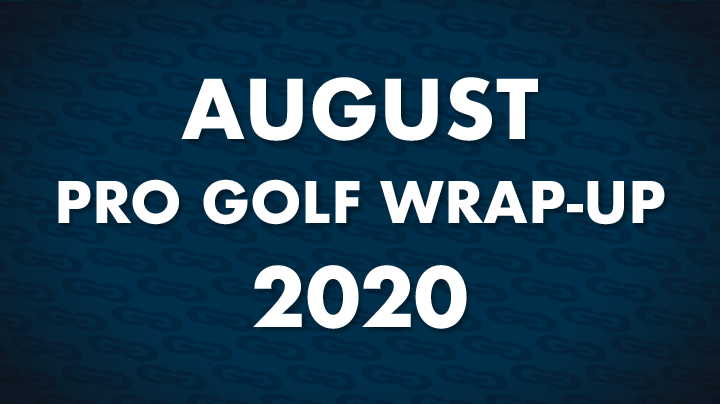 It’s sure nice to be back in the saddle reporting on the latest golf news. Welcome to the August Pro Golf Wrap-Up – everything you need to know in the world of golf expertly curated by your friends at Global Golf Management.

The month of August was about majors – finally – but it was also about the major development of the return of the women’s game. The LPGA Tour, which hadn’t held a tournament since mid-February, came back strong with five events, including the first two in the Toledo, Ohio, area to start the eighth month on the calendar.

As for the major championships, second-year pro Collin Morikawa put together a spectacular final round to eclipse Dustin Johnson in the PGA Championship – the only major contested in the 2019-2020 PGA Tour season. That surprise was nothing compared to the incredible performance by Sophia Popov of Germany in the AIG Women’s Open at Troon, Scotland. Whatever happens the rest of the year in golf, Popov likely will be the feel-good story of 2020.

Danielle Kang earned major kudos by winning both Toledo-area stops, the LPGA Drive On Championship at storied Inverness Club and the popular Marathon LPGA Classic presented by Dana at Highland Meadows in the Toledo suburb of Sylvania. Kang beat Celine Boutier by a stroke at Inverness and then rallied past Lydia Ko in the latter for another one-stroke triumph. Impressive stuff.

Tying for ninth at Highland Meadows was Symetra Tour player Popov, which earned her a spot in the AIG Women’s Open at Troon. And, golly, did she take advantage of that opportunity. Popov, who was competing in Cactus Tour events in Arizona while the major tours were on hiatus due to the coronavirus pandemic.

Ranked 304th in the world, the German native pulled off a stunning two-shot victory worth a life-changing $675,000 just one year after almost quitting the game. She broke down in tears when her last putt dropped as the player who had no status on the LPGA beat the game’s best players.

In the week prior to the Women’s Open, veteran Stacy Lewis captured her 15th career title as a pro and first as a mom at the Aberdeen Standard Investments Ladies Scottish Open. Her 13th win on the LPGA Tour came after beating Azahara Munoz, Cheyenne Knight and Emily Pedersen in a four-way playoff after each player ended up at 5-under 279 through 72 holes at The Renassaince Club in North Berwick.

Capping off the month was Austin Ernst emerging with her second LPGA title at the Walmart NW Arkansas Championship Presented by P&G in Rogers, Ark. Ernst rallied to beat Anna Nordqvist by two strokes thanks to a closing 8-under 63 at Pinnacle Country Club.

On the men’s side, the PGA Championship at Harding Park in San Francisco proved to be one of the most exciting events of the year with a packed leaderboard that included Brooks Koepka vying for his third straight win in the tournament. Instead, second-year pro Collin Morikawa, a California native, broke free from the pack thanks to one of the great shots in the championship’s history.

On the way to closing with a 6-under 64, Morikawa eagled the 296-yard par-4 16th hole by driving the green and putting the shot within seven feet of the hole. It was a stroke of brilliance by the 23-year-old who won for the third time on the PGA TOUR in just his 28th pro start. He finished at 13-under 267, two strokes ahead of Paul Casey and 54-hole leader Dustin Johnson.

Thomas won his second WGC title at the FedEx St. Jude Invitational on Aug. 2, powered by a short-game clinic that enabled him to overcome a three-stroke deficit. He rose to No. 1 in the world for the first time in two years after finishing with a 5-under 66 and 13-under 267 total. At 27, Thomas, who won this event two years ago when it was played in Akron, Ohio, became the third-youngest player since 1960 to reach 13 wins, trailing Tiger Woods and Jack Nicklaus. Nice company.

The same week, in Truckee, Calif., Werenski became the fifth straight first-time winner on the PGA TOUR in the Barracuda Championship, which is contested using the Stableford Scoring System. Werenski, 28, finished with 39 points in the tournament he lost three years earlier in a playoff, beating Troy Merritt by one shot at Tahoe Mountain Club’s Old Greenwood Course.

Jim Herman, 42, was a surprise winner in Greensboro, N.C., rallying past Billy Horschel to win the Wyndham Championship for his third TOUR title. Herman fired a 7-under 63 at Sedgefield Country Club to finish at 21-under 259. Horschel finished one stroke back after his 8-foot birdie try on the 72nd hole slid by the cup.

There were more surprises at the second FedEx Cup Playoff event at Olympia Fields Country Club near Chicago when Rahm kept Johnson from winning his second straight event by sinking a 65-foot birdie putt on the first hole of sudden death to capture the BMW Championship.

Johnson, who held yet another 54-hole lead, had made a 45-foot putt of his own on the 72nd hole to force overtime. Both men finished at 4-under 276 with Rahm shooting the low round of the tournament in the final round, a 64.

Johnson might have been edged out at the BMW Championship, but the week before in the Northern Trust at TPC Boston he left no doubt that he was going to win the first playoff event.

With a closing 8-under 63, Johnson registered an 11-stroke triumph. He finished at 30-under 254, making him only the third player in PGA TOUR history to finish at 30 under or better. His margin of victory was the largest since Phil Mickelson won by 13 at the 2006 BellSouth Classic in Atlanta.