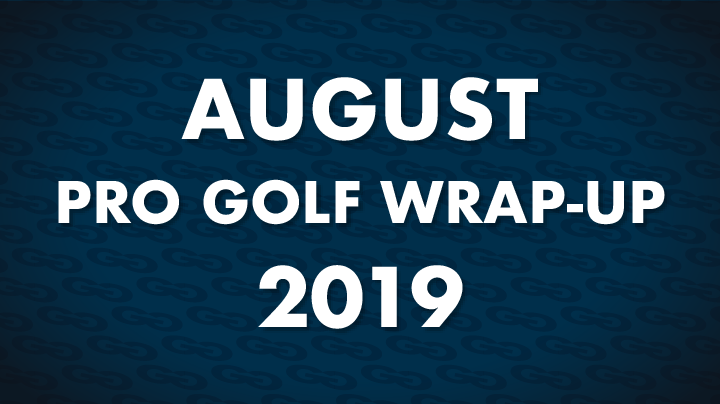 Welcome to the August Pro Golf Wrap-Up – everything you need to know in the world of golf expertly curated by your friends at Global Golf Management.

Rory McIlroy won the FedEx Cup title for the second time. Jin Young Ko broke one of Tiger Woods’ records on the way to solidifying the top spot in women’s golf. A young Japanese upstart captured the final women’s major of 2019. Those were the headlines in golf in the month of August.

Let’s start with Ko, who won the CP Women’s Open in Ontario, Canada, on August 25 for her fourth win of the year. She didn’t make a bogey. In fact, that performance was part of a streak that continued into the final event of the month, the Portland Classic.

When she bogeyed the ninth hole in the first round at Columbia Edgewater Country Club, the World No. 1 saw her streak of 114 straight holes without dropping a shot end, not only beating Inbee Park’s streak of 93 but also surpassing Woods’ record of 110 holes he set in 2000. The Portland Classic was not completed until September 1.

Meanwhile, at the CP Women’s Open at Magna Golf Club in Aurora, Ontario, Ko fired a final-round 8-under 64 to post a five-stroke victory over Nicole Broch Larsen. Ko, 24 and in just her second season on the LPGA, finished at 26-under 262 and became the first player since Park in 2015 to win an LPGA event without making a bogey. Her streak started at the AIG Women’s British Open, where she finished third. Her four-win season includes two titles in major tournaments.

There no longer is a major championship in August in men’s golf, but Northern Ireland’s Rory McIlroy took golf’s major haul, pocketing the richest first prize in the game with his victory in the Tour Championship at East Lake Golf Club in Atlanta.

Under the new format in which McIlroy began the 30-man tournament five strokes behind Justin Thomas in a pre-tournament seeding arrangement, McIlroy shot four rounds in the 60s, including a final-round 4-under 66 and finish at 18 under, four strokes ahead of Xander Schauffele. McIlroy shot 13-under 267 for the week after being seeded fifth at minus-5. He claimed the $15 million first prize as the FedEx Cup champion.

“Such a cool way to end what has been for me a great season,” McIlroy said after winning his third PGA TOUR event of 2019 and joining Tiger Woods as two-time FedExCup champions. He posted 14 top-10 finishes on the season. “I’ll look back on this season, and there’s been a lot of good things that I’ve done and try to improve for next year again.”

In the penultimate playoff event, the BMW Championship in suburban Chicago, Thomas held off Patrick Cantlay with a masterful back-nine push. The 2017 FedEx Cup champion birdied four of his final eight holes for a 4-under 68 at the No. 3 Course at Medinah Country Club for a three-stroke edge over Cantlay, whose closed with a 65. He finished at 24-under 264 fueled by a course-record 61 in the third round.

The victory was Thomas’ 10thin his career and gave him the No. 1 seed in the Tour Championship, where he eventually ended up tied for third.

His 2-under 69 and 16-under 268 total was good enough to beat a field of 125 players as Reed finished one stroke clear of Abraham Ancer of Mexico. The top 70 players advanced to the BMW Championship.

The first PGA TOUR event of the month was the last of the regular season, and J.T. Poston, a native of Hickory, N.C., beat Webb Simpson by a stroke after a final-round 8-under 62 at Sedgefield Country Club in Greensboro, N.C.

Poston joined the LPGA’s Jin Young Ko as an August winner with an unblemished scorecard, posting a 22-under 258 total to tie the tournament record. A first-time winner, Poston became the first player to triumph on the PGA TOUR without a bogey since Lee Trevino in 1974 in New Orleans.

Two more LPGA events were completed in August, including the final women’s major of the year, the AIG Women’s British Open in Woburn, England, which was claimed by surprise champion, 20-year-old Hinako Shibuno of Japan.

Competing outside of her home country for the first time, Shibuno sank an 18-foot birdie putt on the 72ndhole for a one-stroke victory. Shibuno overcame an early four-putt green to shoot a 4-under 68 at the Marquess Course and top a seasoned field at 18-under 270.

Lizette Salas, who shot a closing 65, lipped out a 5-footer for birdie on the home hole to come up a stroke short.

Hur fired a five-under-par 66 – tied for the lowest round of the day – in wet conditions to earn a four-stroke victory at The Renaissance Club in North Berwick, Scotland. Hur, 29, finished at 20-under 264, while Mariya Jutanugarn of Thailand and the reigning US Women’s Open champion Jeongeun Lee6 tied for second.