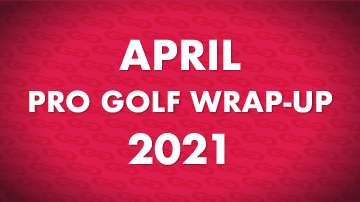 Welcome to the April Pro Golf Wrap-Up – everything you need to know in the world of golf expertly curated by your friends at Global Golf Management.

Hideki Matsuyama’s victory in the 85th Masters marked a significant milestone in golf as the Japanese star broke through to win the first major championship by a men’s golfer from a country that has been a huge supporter of the game.

Matsuyama was one of two major champions crowned in the month of April. On the women’s side, Patty Tavatanakit of Thailand held off an amazing run by Lydia Ko to capture the ANA Inspiration for her first win on the LPGA.

With a 1-over-par 73 in the final round at Augusta National Golf Club in Augusta, Ga., Matsuyama defeated rookie Will Zalatoris by one stroke and became the second player from Asia to capture a major after Y.E. Yang in the 2009 PGA Championship at Hazeltine National near Minneapolis. Matsuyama, 29, won his sixth TOUR title and his first since 2017 with a 10-under 278 total. That was 10 strokes higher than Dustin Johnson’s record aggregate score in the 2020 Masters contested last November.

“I’m really happy. I’m very relieved,” Matsuyama said after his breakthrough victory, which had all of Japan cheering for him. “Hopefully, I’ll be a pioneer and many other Japanese will follow,” Matsuyama said.

Matsuyama became the seventh player to win low amateur and later a green jacket. Nicklaus, the Memorial Tournament Founder and Host, was the first, in 1960, when he finished T-13. The others: Ben Crenshaw, Sergio Garcia, Cary Middlecoff, Phil Mickelson and Tiger Woods.

Tavatanakit’s win was even more surprising than Matsuyama’s. Just a rookie, Tavatanakit, 21, was ranked 103rd in the world when she calmly held off Ko by two shots and joined Juli Inkster (1984) as the only rookie champions of the ANA Inspiration.

“It’s a dream come true,” Tavatanakit said after taking a five-shot lead in Sunday’s final round and then firing a bogey-free 68 to complete 72 holes in 18-under-par 270 on the Dinah Shore Tournament Course at Mission Hills Country Club in Rancho Mirage, Calif.

Ko made it interesting with a 10-under 62 the final day, equaling the course record set by Lorena Ochoa in 2016.

In the very next tournament, Ko let it be known she wasn’t about to be held back after her inspirational ANA performance. In her next outing, she ended a three-year drought in spectacular fashion at the Lotte Championship.

Closing with a 7-under-par 65 at Kapolei Golf Club, Ko won for the first time in 1,084 days, shooting a tournament-record of 28 under par to beat Inbee Park by seven strokes. Ko’s 260 total in Oahu marked the third-lowest 72-hole score in LPGA history. Sei Young Kim holds the record at 31 under at the 2018 Thornberry Creek LPGA Classic. Park closed with a 63 to tie three others, including Kim.

Rounding out the month was the HUGEL-AIR PREMIA LA Open, where Canada’s Brooke Henderson captured her 10th LPGA title. Henderson fired a final-round 4-under 67 at Wilshire Country Club to surge past Jessica Korda, leader after each of the first three rounds, and win by a stroke after Korda closed with a 72.

Henderson, 23, finished at-under 268 to win for the first time in nearly two years.

Other April winners on the men’s side were Jordan Spieth in the Valero Texas Open – which, like Ko, was a popular win that ended a long victory drought – Stewart Cink in the RBC Heritage, and Australians Marc Leishman and Cameron Smith in the Zurich Classic of New Orleans, a two-man team event.

The month was all about players winning after considerable victory droughts and Spieth had endured quite a long one, having not registered a top finish since he won the 2017 Open Championship. With a closing 6-under 66, Spieth held off Charlie Hoffman by two strokes and won his 12th PGA TOUR title in the Texas Open.

Spieth, 27, completed 72 holes in 18-under 270 at TPC San Antonio’s Oaks Course. The Dallas native is just the fifth player in the last 40 years to win 12 or more events before age 28, joining Tiger Woods, Phil Mickelson, Rory McIlroy and Justin Thomas.

Stewart Cink joined a small group of players who have won multiple times in their late 40s when he captured his third win in the RBC Heritage. Cink, 47, waltzed to a four-stroke victory at Harbour Town Golf Links. With a final round 1-under 70 and 19-under 265 total, Cink beat Emiliano Grillo and Harold Varner III for his second win of the season, joining Bryson DeChambeau as the only multiple winners thus far.

The second win of the season, and eighth of his career, made Cink the fourth man to win twice or more after turning 47. The others: Sam Snead, Julius Boros and Kenny Perry.

Australia reigned supreme in the final event of the month as Leishman and Smith teamed up for their victory in New Orleans, beating the South African duo of Charl Schwartzel and Louis Oosthuizen in a playoff in the Zurich Classic on what was a national holiday in the Aussies’ homeland.

Playing alternate shot in the final round, Leishman and Smith carded a final-round 70 while South African friends Schwartzel and Oosthuizen, each a major winner, combined for a 71 as each team posted 18-under 270 in the event that featured two days of better-ball and two days of the alternate shot game.

Smith and Leishman won in the first extra hole with a par on the par-5 18th at TPC Louisiana after Oosthuizen drove into the water hazard right of the fairway, resulting in an eventual double bogey. Smith won for the second time in the event, teaming with Jonas Blixt in 2017.

Major tournaments coming up next in the month of May are the PGA Championship for the men and the U.S. Women’s Open for the ladies.