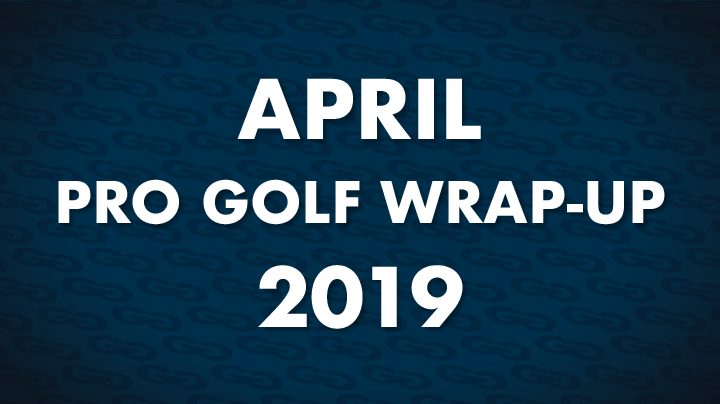 Welcome to the April Pro Golf Wrap-Up – everything you need to know in the world of golf expertly curated by your friends at Global Golf Management.

Tiger Woods won his 15th major championship with his fifth victory in the Masters Tournament. That was kind of the big news in the month April.

After all, it had been 11 years since Woods won a major title, that coming at the 2008 U.S. Open. That tied an all-time record between major wins. And after two years out of the game because of recurring back problems – which led to a last-ditch surgical procedure, spinal fusion – and so many years removed from winning a major, it was thought that Woods wasn’t capable of winning one of the big four events in men’s professional golf.

But he did it. Thanks to a steady closing 2-under 70 at Augusta National, Woods, 43, finally won a major when he did not hold at least a share of the lead after 54 holes, and at age 70 he became the second-oldest Masters winner after Jack Nicklaus, who was 46 in his 1986 triumph. He completed 72 holes in 13-under 275, one stroke ahead of world No. 1 Dustin Johnson, Brooks Koepka, who edged Woods at last year’s PGA Championship, and Xander Schauffele.

“When I tapped the [final] putt in, I don’t know what I did, but I know I screamed,” Woods said in Butler Cabin after the round. “To have my kids there, it’s come full circle. My dad was here in ’97, and now I’m the dad with two kids there.

“It’s overwhelming, just because of what’s transpired,” he added. “It’s unreal for me to experience this.”

Woods wasn’t the only major winner in April, as Jin Young Ko captured the ANA Inspiration the week before in the year’s first major event on the LPGA. It was her first victory in a major and it propelled her to No. 1 in the Rolex Women’s World Rankings.

“I still can’t believe. I’m really happy,” Ko, 23, said after her final-round 70 at Mission Hills Country Club gave her a three-stroke victory over Mi Hyang Lee. Two weeks after winning the Bank of Hope Founders Cup, Ko finished at 10-under 278 in the ANA Inspiration for her four career victory.

Along with Ko, Minjee Lee and Brooke Henderson were winners on the LPGA in April.

Henderson successfully defended her title in the Lotte Championship and won for the eighth time in her career, which tied her with Sandra Post for most LPGA titles by a Canadian golfer. Henderson, just 21 years old, closed with a 2-under 70 and completed 72 holes in 16-under 272 at windy Ko Olina Golf Club for a four-stroke victory over Eun-Hee Ji.

Lee won the Hugel-Air Premia LA Open with a 14-under 270 aggregate score after closing with a 3-under 68 at Wilshire Country Club. Lee, 22, won her fifth LPGA Tour title, and at the time jumped from fourth to second in the world.

To round out the month of April on the men’s tour, the winners were first-timers Corey Conners and C.T. Pan and the odd-couple tandem of Jon Rahm and Ryan Palmer in the team event in New Orleans.

Rahm, from Spain, and Palmer, from Texas, seemed like an odd pairing for the team event, the Zurich Classic, at TPC Louisiana, but they were an effective one in taking the title, giving Palmer his first win in almost nine years.

The duo combined for a 3-under 69 on the final day playing a modified alternate shot format, and came in with a 26-under 262 total, good for a three-stroke victory. Palmer, 42, won for the fourth time in his career, and Rahm, 24, got his third PGA TOUR title.

At iconic Harbour Town Golf Links, C.T. Pan of Chinese Taipei outlasted Matt Kuchar to grab his first TOUR title at the RBC Heritage. Pan, 27, fired a 4-under 67 on the final day and finished at 12-under 272 to win by a stroke ahead of the former winner at Harbour Town.

Finally, we end with how the month started, at the Valero Texas Open, where Canadian Corey Conners submitted an inspirational effort to win at TPC San Antonio.

Conner fired a 6-under 66 the final day and won by two strokes over veteran Charley Hoffman with a 20-under 268 total. The win not only was the first of his career, but it also came after he got in the field via Monday qualifying – becoming the first player in nine years to Monday qualify and win on the PGA TOUR.

What made the victory even sweeter was that he was the last man to qualify for this year’s Masters, and was one of 87 players in the field. We all know how that tournament ended.