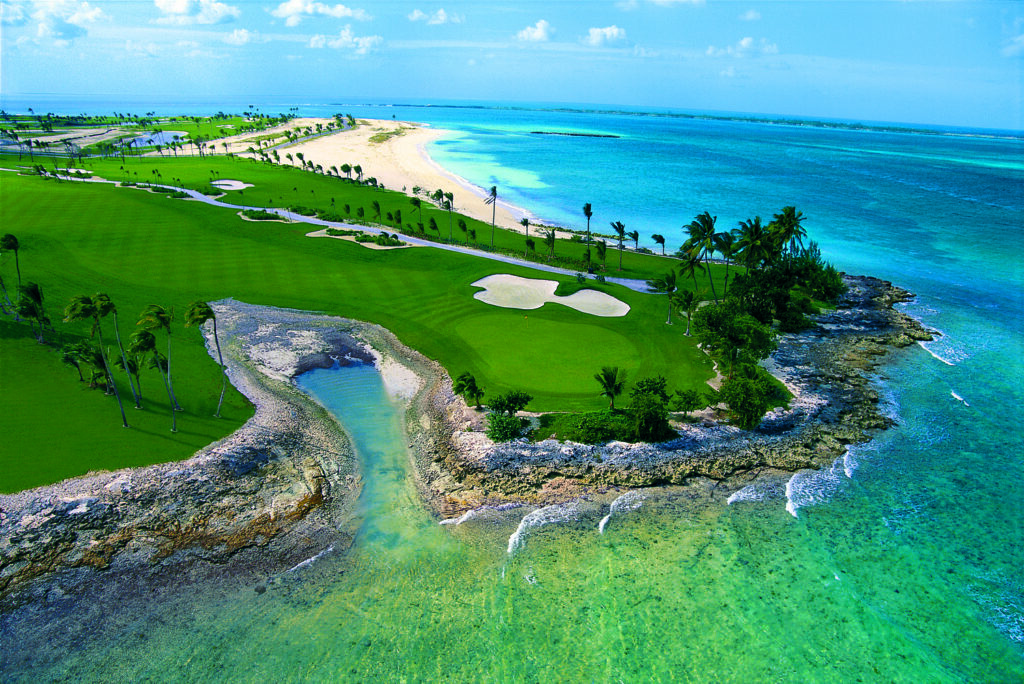 THE PLAYERS – One hundred eight (108) golfers will compete in the fourth annual Pure Silk-Bahamas LPGA Classic. The field is headed by Rolex World Rankings No. 2 Inbee Park, a seven-time major champion, and No. 3 Stacy Lewis, the 2014 LPGA Rolex Player of the Year, plus defending champion Sei Young Kim, the 2015 Louise Suggs Rolex Rookie of the Year. Five of the top 10 players in the current Rolex Women’s World Golf Rankings are entered.

AT STAKE – The Pure Silk-Bahamas LPGA Classic offers a purse of $1.4 million, plus a full allocation of points in the Race to the CME Globe season-long competition. The winner receives $195,000 and 500 CME Globe points.

LOCATION – The Tom Weiskopf-designed Ocean Club Golf Course is located on the eastern end of Paradise Island in Nassau, Bahamas.

FORMAT AND SCHEDULE OF PLAY – Eighteen holes of stroke play are scheduled on each of four days – Thursday, Jan. 28 through Sunday, Jan. 31.

TELEVISION COVERAGE – The Pure Silk-Bahamas Classic will receive 10 hours of live coverage on the Golf Channel. The television schedule (EST):

LAST YEAR – Rookie Sei Young Kim became a Rolex fist-time winner when she defeated Ariya Jutanugarn and Sun Young Yoo in a sudden-death playoff. Each finished 72 holes at 14-under 278. Brittany Lincicome finished one stroke back for fourth place.

MAJOR WINNERS IN THE FIELD – There are 11 major championship winners in the field for the Pure Silk-Bahamas LPGA Classic with a total of 23 major titles:

2015 LPGA TOUR WINNERS – The Pure Silk-Bahamas Classic is the first of 34 events on the LPGA Tour in 2016. There are 12 champions from the 2015 LPGA schedule who are entered in the tournament at Ocean Club:

THE OLYMPICS – Golf returns to the Summer Olympics for the first time since 1904. The Summer Games will be held in Rio de Janeiro, Brazil, on the Olympic Golf Course designed specifically for the competition by architect Gil Hanse. The women’s and the men’s competitions each feature 60 players competing over 72 holes of stroke play. The men’s tournament is scheduled for August 11-14 and the women’s August 17-20.

There are 26 players in the Pure Silk-Bahamas LPGA Classic field who are currently inside the 60-player qualifying list:

OCEAN CLUB GOLF COURSE – Dick Wilson designed the original layout of the Ocean Club, which opened in 1954. The course was completely redesigned in 2000 by Tom Weiskopf, who opened the layout to the scenic ocean views while infusing the course with tougher strategic features. The redesign, which included lengthening the layout to 7,159 yards, was completed in 2000 and re-opened to rave reviews. The course rating is 75.6 and its slope is 140 (compared to an average of 113).

ARCHITECT TOM WEISKOPF – Tom Weiskopf became a professional golfer in 1964 and played on the PGA TOUR from 1968-1982, winning 16 times. He also won the British Open in 1973 and later won the U.S. Senior Open in 1995. He has won 28 titles worldwide. As a golf course architect, he has more than 40 courses to his credit, many of which have received notable praise and ranking.

TICKETS – Admission is free to all spectators.

GENERAL PARKING – All general parking for the Pure Silk-Bahamas Classic will be available free of charge on Paradise Island. Spectators are asked to follow the posted signs.

A FEW TOP WOMEN IN BAHAMAS GOLF – The Bahamas are part of the Caribbean Golf Federation. Players of note who have competed in the Pure Silk-Bahamas LPGA Classic:

Georgette Rolle, 29, is a two-time Bahamas National Women’s Amateur Champion (2003, 2007). An LPGA Teach Professional, Rolle will be making her third appearance in the Pure-Silk Bahamas LPGA Classic. She hopes to make the cut for the first time in 2016.

Raquel Riley, a former member of the Bahamas National Team, earned an exemption into the 2015 Pure Silk-Bahamas LPGA Classic. A former winner on the Sun Coast Ladies Tour, Riley, 34, missed the cut.

VOLUNTEERS – More than 400 volunteers were recruited to serve on more than 25 committees to help stage this event.

DISALLOWED ITEMS – Cameras are permitted only during practice rounds (Tuesday-Wednesday). Cell phones are permitted, but should be kept on vibrate or silent mode at all times.

GOLF HISTORY IN THE BAHAMAS – Golf came to the Bahamas in the 1920s and the first golf course built was the Cable Beach Golf Club, which became a getaway destination for celebrities like William Randolph Hurst, Burl Ives and Benny Goodman.

VISIONARY SOL KERZNER’S IMPACT – South African Sol Kerzner purchased the Ocean Club and many other area properties on Paradise Island in 1994 and turned them into luxury destinations. He founded Sun International Hotels, a world leader in family entertainment and gaming retreats.

GOLF EVENTS IN THE BAHAMAS – The Michael Jordan Celebrity Invitational was held at the Ocean Club from 2001 through 2010. The 2000 Office Depot Father/Son Celebrity Classic was contested at the Ocean Club. The Michael Douglas and Friends Celebrity Golf Tournament also was held at the Ocean Club. Julius Boros defeated Arnold Palmer in a Shell’s Wonderful World of Golf made-for-television match in 1967 at Cotton Bay. And the PGA TOUR conducted the Bahamas Open for two years in Freeport, with Doug Sanders winning in 1970 at Kings Inn and Golf Club and Bob Goalby winning in 1971 at Lucayan Country Club.